THE managing director of Glendola Leisure has reiterated the company’s commitment to Scotland a little over a month after the acquisition of Saltire Taverns.
Speaking to SLTN, Alex Salussolia said the Middlesex-based company is optimistic about trading in Scotland, having seen like-for-like sales increase 12% in the past year.
He described the market in Glasgow and Edinburgh as “quite sophisticated”, but with a focus on value.
“We love this marketplace,” he said.


“Like all marketplaces it has its nuances, and I think in Glasgow and Edinburgh value for money – not discounting – is really important. If you give somebody a product – it could be an expensive price or a promotional price – the actual product has to stand up.”
Glendola now operates four outlets in Glasgow – Alston Bar & Beef, Gordon Street Coffee, Waxy O’Connor’s and Horton’s – and three in Edinburgh: Frankenstein’s and the recently-acquired Saltire venues Angel’s Share and Le Monde.
In addition to these properties Glendola is planning a new serviced apartment development on Edinburgh’s Rose Street, which would include a Bar & Beef restaurant in its basement, while sister business Carlton Hotel Collection has plans to build a hotel on the capital’s Market Street.
Salussolia said that once all hotels are up and running there may be a shared rooms management service between the Carlton and Glendola properties (Carlton also operates a hotel in Glasgow) but each property will retain its own team and identity.
And he is confident the acquisition of Saltire from Billy Lowe was a good move for Glendola.
“The numbers are looking robust and the business is fabulous and we’re very privileged to be taking over Billy’s legacy,” he said. 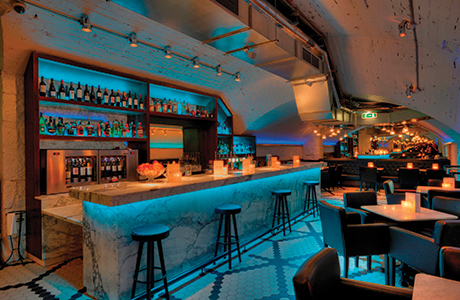 “Hopefully we’ll do it justice, make the right investments and grow the business further.”
He insisted the company has no immediate plans to make changes to the two hotels, but acknowledged that Glendola “have ideas and we have resources to make some investment in the businesses”.
“Some of that is on the back of plans that Billy might have had for the properties, and some is stuff we might be [implementing] going forward,” said Salussolia.
“But it’s too early for me to comment.”
And although the business has so far concentrated its efforts on Glasgow and Edinburgh, Salussolia said Glendola is open to expansion into other Scottish locations in the years ahead.
He said once the business has built a “critical mass” in the central belt it could start looking further afield for opportunities at the right price.
“That’s the important thing,” said Salussolia.
“You can buy stuff, but it’s buying stuff at the right price that allows you to actually make a return out of it when you run your operation.
“Certainly there are indications that pricing is going up massively in the market in Scotland, and how long developments will leave enough headroom for us to get excited about remains to be seen.
“We may end up going through a period of not doing much, until the market stabilises again.”
In the meantime Glendola will continue to invest in its existing estate. Current plans include a refurbishment of Glasgow pub Horton’s, which will transform the property into the company’s first ‘brew pub’.
“There’d be a new brand and concept there, which is our first step into becoming an artisanal brewer and we’re excited about that,” said Salussolia.
“If that works well we might want to do more of that, but we’ll see.”