Beer fans in Glasgow are in for a treat this summer as the Glasgow West End Beer Festival returns to Café Source Too as part of the West End Festival.
Now in its second year, this summer’s beer festival will build on last year’s event, with more brewers and a beefed up entertainment offer.

Taking place on July 1 and 2, the West End Beer Festival is expected to host around a dozen local independent brewers, up from nine last year, who will be on hand to serve their products and talk all things beer with attendees over four sessions.
Brewers in attendance will include Fyne Ales, Alechemy, Stewart Brewing, Jaw Brew, West, Ayr Brewing Company, Tryst and Fallen Brewing, with off-trade craft beer specialists The Good Spirits Company, Valhalla’s Goat and Hippo Beers also in attendance. The festival kicks off with a trade session on the Friday afternoon (July 1), followed by three public sessions comprising a family-friendly session on Saturday (July 2) afternoon and evening sessions on both nights.
Conor McGeady, festival organiser and staff member at Café Source Too – a bar, restaurant and function venue attached to Hillhead Sports Club – told SLTN he hopes to sell out this year’s event. 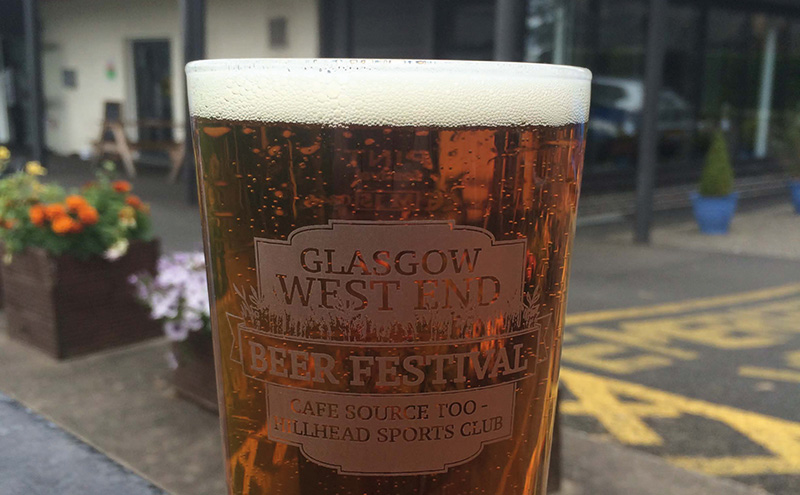 The festival kicks off with a trade session on the Friday afternoon (July 1), followed by three public sessions comprising a family-friendly session on Saturday (July 2) afternoon and evening sessions on both nights.
Conor McGeady, festival organiser and staff member at Café Source Too – a bar, restaurant and function venue attached to Hillhead Sports Club – told SLTN he hopes to sell out this year’s event.
“We had over 800 (attendees) last year and we’re aiming to have 1200 people this year,” said McGeady.
“We’re also aiming to have more live music this year. We had some folk sessions last year but we’re aiming to have music on pretty much the whole session this year, but again it’ll just be small bands and folk musicians – nice background music.”
McGeady said this year’s festival will also cater to licensees through the introduction of a trade session, with tickets available on request from Café Source Too.
“The idea behind doing that is not only for the festival – getting the word out amongst the trade – but also so the brewers can pick up more business by introducing them to folk that we know and folk that come along,” said McGeady.
“And if they’re already a customer it’s a good opportunity for them to meet face-to-face with the brewer and have them answer any questions that they might have.”
The West End Beer Festival may only be in its second year, but the passion behind it has been brewing a while longer at Café Source Too.
“Basically, for a year to a year and a half – before the festival started last summer I had been doing (beer) tasting events in here,” said McGeady.

“The west end has some of the best beer shops and real ale pubs in Glasgow.”

“So we do a meet the brewer with a kind of twist where our chefs do a tasting menu.
“We pair beers with the dishes and we also cook the dishes with the beer.
“The brewers come along and do the usual brewer talk.
“It just kind of grew from there.”
While beer festivals have become big news again in Glasgow – with the return of CAMRA’s Glasgow Real Ale Festival, bottle shop Hippo Beers’ Great Scottish Beer Celebration and Craft Beer Rising to name a few – as these events all take place east of the M8, McGeady said it makes sense for the west end to get involved and host its own beer festival.
“You look at the west end, you’ve got places like Inn Deep, you’ve got Hippo Beers, Valhalla’s Goat, you’ve got all these amazing craft beer shops, not to mention some of the best real ale pubs in Glasgow, but there was no festival which kind of brings it all together, brings all these independent breweries together under the one roof.
“So that was it, really, I thought let’s see what we can do.”