GROWTH is the watchword at Bar Soba at the moment, as the Glasgow-based bar group teeters on the precipice of a grand expansion which its owner hopes will turn the business into a UK-wide brand over the next few years.
The Soba brand currently trades over five venues with three in Glasgow, one in Edinburgh and a first venture south of the border in Leeds, with plans for two more outlets this year.

Despite the recent buzz of activity around the brand, and some grand plans for the bar group going forward, Brad Stevens, who launched the first Bar Soba in Glasgow’s Mitchell Lane in 1999, explained that the first years of Soba were quiet by design.
“After opening Soba in 1999 we had a couple of other concepts, [but] I was always wary,” said Stevens.
“I was quite young at the time. We’d opened Soba and it’d become quite cool in Glasgow, it was very well known, doing pre-club stuff for the Subclub. We had lots of DJs coming in that you would expect to see in nightclubs.
“Food was going up and kind of being younger at that time it’s almost like I didn’t want to grow. It had become this little niche thing that had become a little Glasgow institution.”
Over a decade later, in 2012 the brand was the subject of the first flurry of expansions with Soba opening on the site of Stevens’ Byres Road venue Blind Pig quickly followed by a move east with the opening of Bar Soba in Edinburgh.
“We had the Blind Pig on Byres Road already and that was the first move; we basically redeveloped that and made it into a Bar Soba, which was very successful from day one, and then we opened up in Edinburgh which was the same year,” said Stevens.
After that initial expansion, the Soba brand held its ground for a few years, but Stevens didn’t rest on his laurels, taking on Glasgow hotel St Judes, which he had  until early 2015. 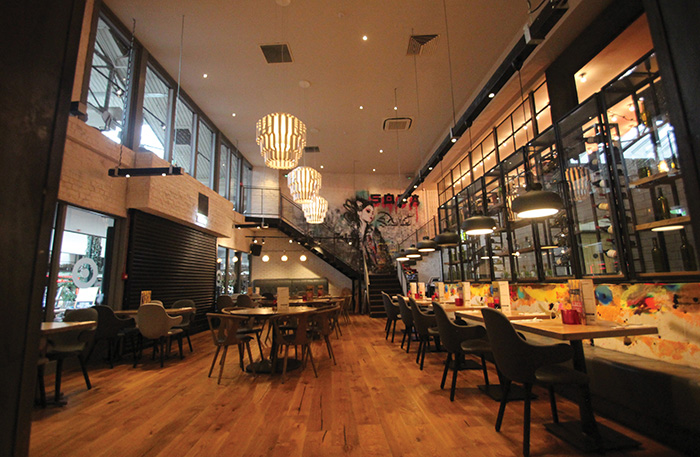 Bar Soba Merchant City is the latest Scottish venture from the group, opening in July of last year.
The new venue represents a major investment from the group, with refurbishment work said to have totalled upwards of £500,000.
The Merchant City bar holds much in common with its sister venues, from the Pan-Asian menu to its focus on cocktails, however Stevens said this new venture, like each unit in the group, has a character of its own.
“There’s a similar aspect [to all the Soba venues] but every one has its own feel,” he said.
“Each has its own character. It’s almost like a chain of independents.”
As the Soba brand has expanded, Stevens said his own role has changed down the years and is now “pretty much office-based”, with a lot to keep on top of.
“This has turned into, well I wouldn’t say a 9 to 5 job, but more like a 9 to 8 job, so obviously you’re looking at the financing, you’re looking at the marketing, and where to go with the business,” he said.
Looking ahead, Stevens said the goal is to grow Bar Soba into a national brand, with sites in Manchester and Liverpool both possibilities.
The southward expansion is something Stevens is determined to pursue, and he reckons it’s been a long time coming.
“It’s almost like we’re sitting up here and all these nationals are coming up to Scotland from down south and moving into Edinburgh and to Glasgow and Aberdeen,” said Stevens.
“There’s not many done it the other way so we’re going to try and pioneer it and push down south.”