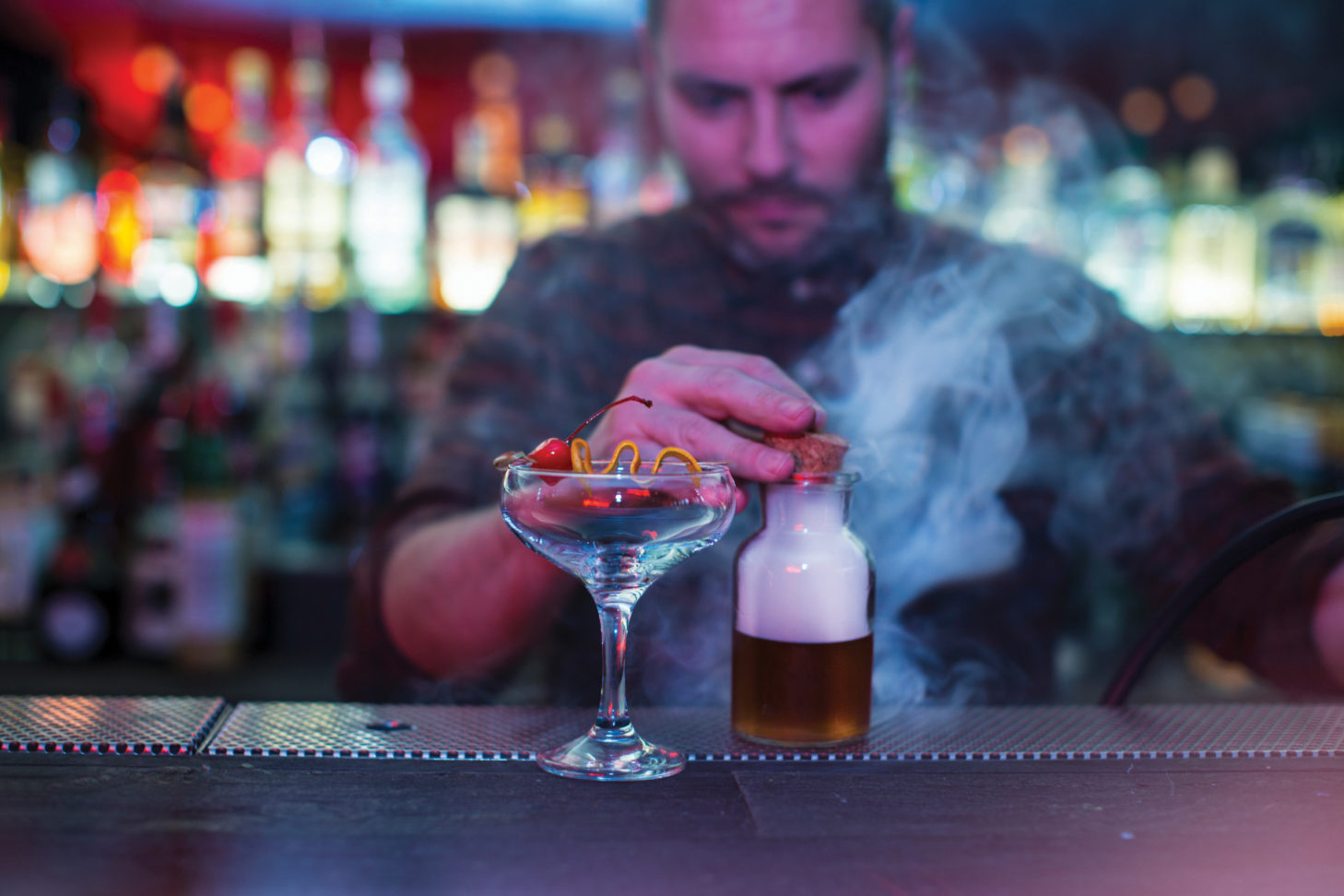 Q. What was the approach when it came to putting Bar Soba’s new cocktail menu together?

A. The menu has been a long time coming, to be honest. It was supposed to be here quite a while ago, but due to expansion recently it took a lot longer than usual. And it did take a little bit of time to get it together, which was really good actually because it meant we had more time to refine it and go over different things and also add lots of new things as well.

The whole emphasis of what we wanted to do was bring fun back to cocktails. For a while traditional, classic cocktails took a massive rise, which is great. But for a lot of palates, some of them are far too strong for customers so bringing the fun back to cocktails was a big element [of the new menu].

Q. Is there still a place for the classics?

A. We do have a lot of drinks on there that are classics with twists on them as well, which are really good. Again, taking a classic drink and just adding a bit more fun to it. Garnishes are really important to drinks. It should complement the drink as well.

Q. Are there any Bar Soba originals on the new menu?

A. Yeah, Soba’s drinks have always been really popular so again there are ones that have real fun elements, like the Drumstick Caipiroska; Caipiroska is a take on a Caipirinha – instead of using Cachaca (sugar cane rum), we’re using vodka. So we’re using a raspberry vodka or a vanilla vodka to create the flavours of the Drumstick lolly – and it tastes exactly like that! And of course it comes with the lolly.

We looked at that and thought there’s a real fun element to that. So we kept a lot of originals like that on the menu, because if we’d taken them off people would absolutely kill us!

So a lot of them stayed on, and a lot of classics with twists and a hell of a lot of originals on there as well.

One emphasis that is quite popular just now is tiki drinks. There’s a lot of tiki bars starting to pop up now, so I wanted to take the tiki drinks and add an Asian element to it because of Bar Soba’s pan-Asian street food. I wanted to add lots of Asian flavours, so we’re using things like lychees and Kaffir lime leaves from Thailand – they add a rich, aromatic flavour to the drink so we take things like vodka and infuse it with that and it just adds a whole new element.

For instance, we have a drink called the Cambodian Mule, and a Mule is just a classic drink that uses basically vodka, lime and ginger beer; so we took that using the Kaffir lime leaves, adding coconut syrup to it instead of your normal syrup, and fresh limes and it just adds a really nice flavour to it.

There’s a lot of stuff and with the Thai tiki ones we’re adding all sorts of different flavours to it.

One popular favourite – this is actually an original – is one called the Yellow Dragon. For a while banana flavours were becoming popular in cocktails – people bringing back the old Crème De Banane – so I added this to the drink as well and it added a really nice flavour to it.

Q. How many cocktails are on the new menu?

A. It’s quite extensive – there are 65 cocktails on the new menu.

Q. Who has been involved in the creation of the new menu?

A. I would say pretty much 90% of it was me. I had a lot of help from one of our staff down in Merchant City called Danny Robertson – he’s been a great help; and we’ve got quite a few units now so training the staff has been quite a challenge. So he’s given me a lot of help on that as well; he’s a very knowledgeable bartender.

He works down in Merchant City; he’s got a couple of drinks on the list too.

Q. Was there anything you had to bear in mind when revising the menu?

A. We sat down with the old menu and took what we thought were the key drinks and from our back office on our tills we could see which cocktails were selling. Obviously we’re not going to take certain ones off, but some popular ones just didn’t quite make the cut.

Q. What’s your favourite cocktail on the new menu?

A. I would probably say the Smoked Walnut & Vanilla Manhattan just because it is so well balanced, it is based on the classic. And if I wanted something fuller, fruity and more fun, I’d go with a Yellow Dragon.

• Brad Stevens opened the first Bar Soba on Glasgow’s Mitchell Lane in 1999. The group now has three outlets in Glasgow (Mitchell Lane, Albion Street and Byres Road), one in Edinburgh and one in Leeds.