An Edinburgh bartender has triumphed over more than 100 other mixologists to win a trip to San Francisco.

Jonny Gausinet, of the Bon Vivant on Thistle Street, came first in a national competition organised by distributor Hi-Spirits. 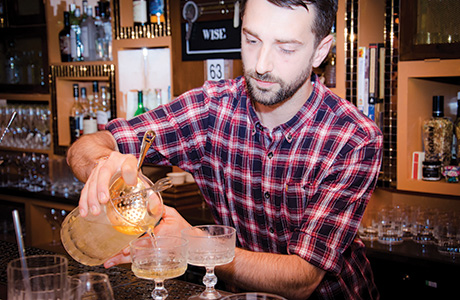 Entrants were asked to create a new cocktail using No. 209 Gin, which would then be served before and after barrel-aging.

The Hi-Spirits team visited shortlisted entrants’ bars to taste the un-aged cocktails and left oak barrels for the drinks to be aged in.

The top ten bartenders in the competition were then invited to the London final, where they served both versions of their drinks to judges.

The event was held at the Demon Wise & Partners basement cocktail bar in the City.

Jonny’s cocktail, called ‘5/0 on the Pier’, clinched first place, followed by the ‘3rd St’ cocktail from Chris Bellingham of the Kenilworth, Warwickshire.

Rob Wood of Le Truc bar and bistro in Birmingham was third with his ‘Lucky Lindy’ cocktail.

Jonny will embark on his all-expenses-paid trip to San Francisco later this year, which will include a tour of the No. 209 distillery.

He said: “It was fascinating to barrel age the No. 209 Gin and see how the oak flavours changed the cocktail.

“I was quite daunted by the high standards set by the other finalists.

“It’s a real honour to have won and I’m now looking forward to visiting the home of No. 209 Gin.”

Paul de Newtown, chair of the judging panel, said all the finalists “were of a very high standard”.

“They had all thought very carefully about the way barrel-aging mellows the fresh, citrus flavour notes of No. 209 Gin and the fact that Hi-Spirits initially had over 100 entries demonstrates the calibre of cocktail making skills in the UK,” said de Newtown.