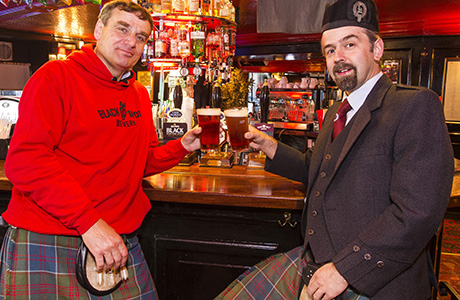 Stockbridge Pipe Band 20th Anniversary Beer – a 4.2% ABV golden ale which is described as “refreshing, crisp and easy to drink” – is being stocked by 14 Edinburgh bars, including Kays Bar, Clarks Bar, The Antiquary, The Bon Vivant, The Raeburn Bar, The Cambridge Bar, The Cumberland Bar, Milnes Bar, The Bailie, The Scran & Scallie, St Vincent, Sandy Bells, The Royal Oak and the Athletic Arms.

The guest beer, which is being stocked by the outlets ahead of Stockbridge Pipe Band’s special anniversary concert on June 6 at St Stephen’s Centre in Stockbridge, will help raise funds for the band with participating pubs giving 10p from every pint sold to the band, which will be matched by Black Wolf Brewery. It is hoped that 2000 pints will be sold raising £400 for the band.

Andrew Richardson, director of Black Wolf Brewery and a member of Stockbridge Pipe Band, said: “We are looking forward to sampling our own beer in the pubs which have supported the band by stocking the beer.”

Pipe major Euan Whitmore said: “Playing in a pipe band is thirsty work and so a new beer is a fitting way of celebrating our anniversary. I am sure the beer will be a big success in raising money for the band and publicising our concert, and I would like to thank the bars for their support.”