AN 18th century coaching inn in east Fife is hosting a number of special events this summer as it marks a quarter century under the ownership of the same family.

The Golf Hotel in Crail was purchased by Graham Guthrie in 1989, and is now run by Graham, as chef proprietor, and manageress Jackie Thomson, with Graham’s sons Richard and Andrew both working at the venue.
To mark the family’s 25-year anniversary in charge of the business, the hotel has hosted several summer barbecues and live music events and is currently offering a dedicated seafood set-menu to coincide with the local Crail Festival.
The business, which includes main and lounge bars, a restaurant and an extensive outdoor area, is said to be popular with locals as well as golf tourists.
Graham said the main challenge over the past 25 years has been to maintain and build on the high standards he inherited from the previous owners.
“It’s a big feeling of responsibility to keep these standards up, because I feel the people before me had kept the standard up,” he said. “The people I bought the hotel from said they felt it was important to sell to the right person and that the hotel was in good hands.”
Expanding the food offer was one of the first steps Graham took to build the business at the hotel. By making food available all day, he claims to have increased turnover by £100,000 in the first year.
As head chef, and working with a team of three other chefs, Graham has assembled a menu that has an emphasis on locally-sourced produce, including beef and lamb from local butchers and seafood caught by local fishermen – many of whom are customers.
The current set-menu includes smoked salmon and baked haddock roulade, grilled lemon pepper salmon steak and grilled haddock in garlic butter.
There have been physical changes to the business as well. 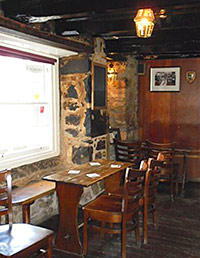 In addition to constructing the outdoor area – which was built on a disused vegetable plot – Graham had the hotel’s six bedrooms extensively refurbished, lowering the number to five but equipping each room with en suite facilities.
A further refurbishment was required after a small fire in 2000, which caused smoke damage to the property, and the bedrooms were refurbished again three years ago.
And real ale has become a focus for the pub side of the business. As well as securing accreditation with the Cask Marque scheme, the main bar stocks a range of beers that includes several from the nearby Eden Brewery in St Andrews.
Graham said consistency has been key to survival during what has been a turbulent time for the trade in Scotland.
“I’ve survived the recession just by being consistent,” he said. “I haven’t raised any prices, and I’ve taken some hits, but it’s been clawing back. Over the last year and a half my business has been growing again. It’s simply because you can’t dip any standards at all.”