Stephen Leckie, chairman and chief executive of the Crieff Hydro Family of Hotels, is presented with the SLTN Award for Industry Achievement for 2019 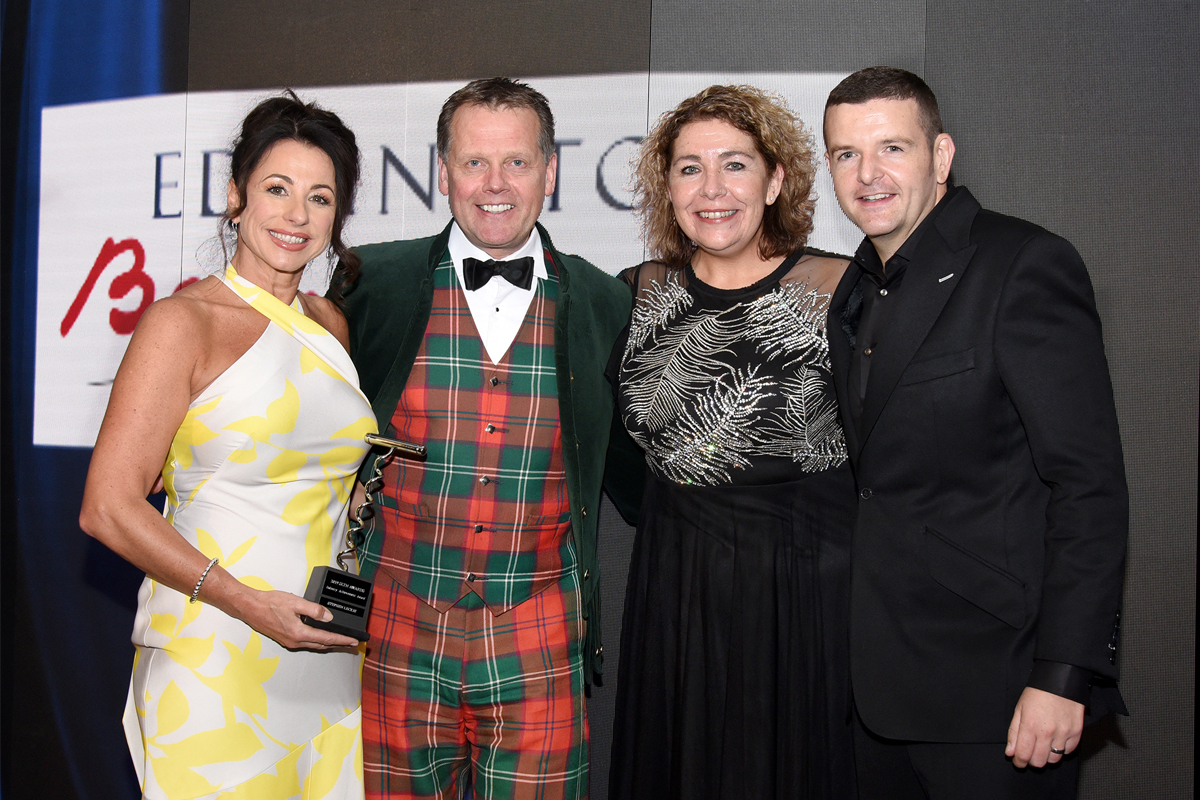 THE head of a 150 year-old family business, and a passionate advocate for the Scottish tourism and hospitality industries, was presented with the top award at last night’s SLTN Awards.

Stephen Leckie is the fifth generation of his family to run Perthshire hotel and resort Crieff Hydro and has taken the business to new heights.

Born into the hospitality industry, Stephen was determined to carve out his own career path and, after studying business and hospitality, worked his way up through the ranks at hotels in Scotland and England, before joining the family business in 1994.

His time at the helm of the business has seen him spearhead a multi-million pound development programme which has established Crieff Hydro as one of Scotland’s leading resorts.

Five years ago the company expanded outside of its heartland with ventures in the Borders and the Highlands, with these hotels also undergoing extensive refurbishments.

In addition to developing his own business, Stephen plays a crucial role in championing Scottish hospitality and tourism. He is the chair of the Scottish Tourism Alliance and heads the Tourism Leadership Group, which oversees the delivery of the national tourism strategy.

The SLTN Awards saw coveted corkscrew trophies presented to Scotland’s top pubs, clubs, restaurants, staff and operators in front of an audience of 700 at the glittering awards ceremony in the Hilton in Glasgow last night (Thursday November 7).

More than 20 trophies were presented at the event, which was organised by leading trade publication, the Scottish Licensed Trade News (SLTN), and hosted by top comedian, Kevin Bridges.

Winners this year hailed from across the country – from Drumnadrochit to Dundee, Coll to Crail.

Stephen Leckie wasn’t the only individual recognised on the night.

Phil Donaldson, founder of Dundee bars group Macmerry 300 – the business behind venues including Draffens, Abandon Ship Bar and the King of Islington – was named Entrepreneur of the Year; Sam Baxendale, co-founder of Edinburgh cocktail bar Kin, took the Craft Spirits Enthusiast title; and Lulu Fedi of The American Bar at Gleneagles was named Mixologist of the Year, with the bar itself taking the Cocktail Bar of the Year trophy. Graham Guthrie, who has spent more than 30 years at the helm of The Golf Hotel in Crail, was named Licensee of the Year.

Other winners included Fiddler’s in Drumnadrochit, which became a record five-time SLTN Whisky Bar of the Year award-winner; The Coll Hotel, on the Isle of Coll, which won Restaurant of the Year (Casual Dining); Glasgow bar Bloc+, which earned the titles of Independent Pub/Bar of the Year and Late Night Venue of the Year; and The Bonnie Badger in Gullane, which scooped Gastropub of the Year.

SLTN editor Gillian McKenzie said: “Against a backdrop of increased taxation, legislation and political uncertainty Scotland’s hospitality businesses continue to fight and flourish. It’s testament to the hard work, determination and talent of the operators and staff across this industry.

“The SLTN Awards is our chance to celebrate the contribution these individuals and businesses make to the licensed trade and the wider economy and to give them the credit they so richly deserve.

“Huge congratulations to all of our SLTN Award winners and highly commended finalists who deserve enormous credit for displaying the high standards, innovation and entrepreneurial spirit our industry is renowned for.”