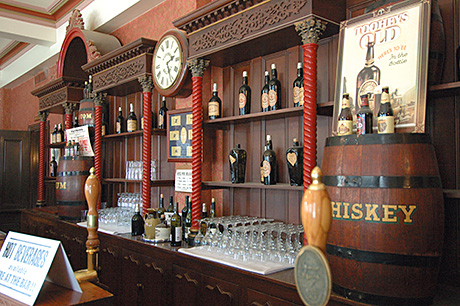 POSITIONED as an ‘accessible’ dark spirit and with a growing number of flavoured variants emerging in the market, American whiskey is said to be capturing the attention of younger drinkers in the Scottish on-trade.

Drinks firms contacted by SLTN say the category is continuing to grow north of the border, with many crediting the use of American whiskey in cocktails and long mixed drinks with bolstering its appeal among a new generation of consumers.
“Bourbon typically appeals to a younger consumer than Scotch, because it’s perceived as being more accessible and flexible,” said Jeremy Hill, chairman of Hi-Spirits, the distributor of Buffalo Trace in the UK.
“Even a simple serve such as a bourbon and cola has ‘cool’ connotations, while the mixability of bourbon means that it can be used in everything from classic cocktails to modern twists, as well as long mixed drinks for the summer.”

Eileen Livingston, brand controller at Maxxium UK, which distributes the Jim Beam bourbon portfolio, agreed that bourbon’s main market is a younger demographic, but added that the introduction of new varieties was broadening the category’s appeal.
“It’s basically a younger guy, predominantly aged 21-35 and that’s who would typically drink your bourbon drinks,” she said.
“That said, I think over the last year we’ve started to see a number of female drinkers and I definitely think that’s down to the launch of flavours for us such as Jim Beam Honey and Red Stag.”
Bourbon flavoured beer Buddy’s is another brand attempting to tap into American whiskey’s growing appeal among younger consumers.
Simon Green, marketing director at parent company Global Brands, said the introduction of new serves has been critical in attracting a younger audience.
“Cocktail culture innovation, such as the emergence of flavoured whiskeys, has attracted a new, younger audience to the category, and bourbon is now considered more fashionable amongst the 18 to 25 year old market,” he said.
And it seems it’s not just younger consumers that are being attracted by the launch of new flavours and products.
“All of our research has shown that flavours are broadening the appeal and bringing new consumers into the category,” said Livingston at Maxxium.
“Not just people who have maybe thought about brown spirits before but actually just people from general spirits categories, including vodka and rum. I think they’ve really been attracted and tempted by the new flavours.
“I think that people find the flavours give permission to mix them a little bit more.”
Livingston went on to say that she thinks the growing popularity of rum and rum-based cocktails has helped boost sales of dark spirits across the board.
“The rise of golden rum and the Mojito has also paved the way for female consumers to be much more open to trying something like bourbon because it’s not seen as something quite as challenging as Scotch,” she said.
But she stressed that bourbon works just as well in a long mixed drink as it does in a cocktail.
In fact, simple serves can help licensees to maximise sales, said Livingston.
“Having a really simple mix drink is a way for us to be quite versatile and appeal to bartenders when it’s quite busy because it’s a great tasting delivery product yet really easy to make and serve,” she added.
A spokeswoman for drinks firm Gruppo Campari, owner of bourbon brand Wild Turkey, said understanding a venue’s customer base is key when deciding which American whiskey products to stock.
“A good rounded range should look for bourbons that offer unique characteristics,” she said.
“The market in the UK as a whole is continually growing, and so licensees should really see what their own clientele need.”

Image – Flavoured American whiskey and bourbons are helping attract new customers to the category, according to brand owners and distributors.