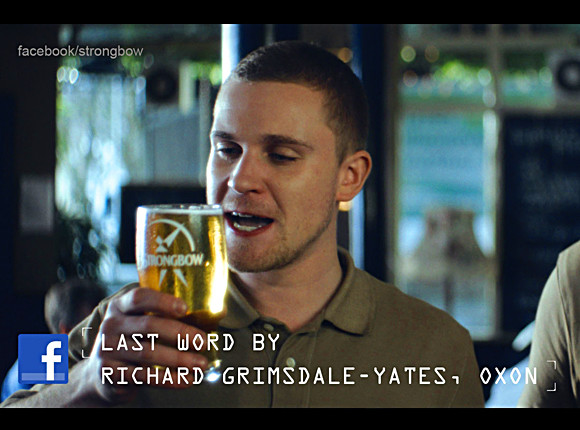 STRONGBOW is giving its fans the last word throughout November when it screens 30 different versions of its new TV ad.

Earlier this year the cider brand’s ‘last word’ campaign asked fans to submit a line of dialogue for the new ad.
Thirty different lines were selected and incorporated into the different edits of the ad.
Since November 1, a different version of the ad is being screened every day, with each featuring the name of the fan who wrote that episode’s line.
As well as on television screens, the ads will appear every day on Facebook and YouTube.
“We wanted to really drive home the Strongbow ‘hard graft’ message this year, and what better way to do this than by asking our fans to put in a bit of their own hard graft and be a part of the 2011 campaign,” said Lucy Henderson, Strongbow brand manager.
“With over 140,000 Facebook fans, we were overwhelmed with the amount of great one-liners we received.”
In addition to the 30 TV ads, the new campaign also includes press advertising and will be followed in the coming months by outdoor poster ads.