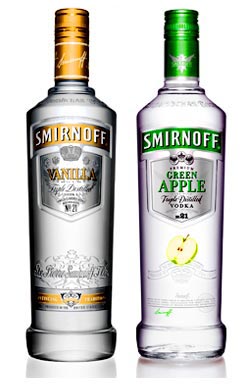 VODKA giant Smirnoff has expanded its flavoured range with the launch of a new vanilla variant in the on and off-trades.

Joining the existing Green Apple, Lime and Blueberry variants, Smirnoff Vanilla has been introduced after what’s described as a “particularly strong” performance during a consumer trial.
The new flavoured vodka, which is designed to be served as a long drink with cola, will be the focus of an outdoor ad campaign next month; there’s also in-store activity planned for the range.
Diageo has also added to its off-trade pre-mix range with the launch of Lime Smirnoff & Cola in a can.
Sampling activity and outdoor ads will support the launch of the new pre-mix variant, which joins a family of products including Gordon’s & Schweppes tonic and Pimm’s & Lemonade.
Diageo GB’s Matt Partner said innovation in vodka is key to attracting new consumers.
“The launch of Vanilla Smirnoff is particularly exciting for us as we now have a range of four flavours that appeal to a spectrum of different consumer tastes,” he said.
“With a simple serve message and a comprehensive support plan, we expect it to perform strongly, particularly as consumers look to try new drinks in the run up to the festive season.”