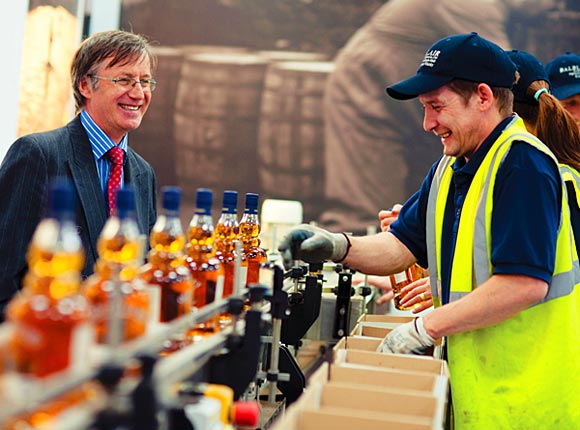 STRONG performances by its malt whisky and top-end spirits brands offset declining sales of Smirnoff and Guinness as Diageo GB reported flat volumes for the year to June 30 last week.

Describing its performance in Britain as “resilient”, the firm posted a 4.1% uplift in sales values in GB, with the value of its beers, wines and spirits sold up 4.2% in the on-trade and 3.9% in off-sales and supermarkets.
However, volumes were down 1% across the on and off-trades.
Diageo’s Reserve Brands business, which takes in Tanqueray gin and Ketel One vodka, delivered 30% net sales growth, which the spirts maker said was driven by single malts like Talisker and The Singleton.
However, sales of both Smirnoff and Guinness dropped, with Diageo claiming “competitive pressure” from cask ale had affected the stout.
The firm’s rebranded Captain Morgan’s Spiced delivered “double-digit” net sales growth; and its wine business recorded a 14% uplift in net sales in the 12-month period.
Andrew Cowan, country director at Diageo GB, said the form had delivered a “resilient” performance in a “challenging consumer environment”.
“We want to continue developing our strong customer relationships in both the on and off-trades as we expect the UK economy to remain challenging,” he said.
Meanwhile, single malt Old Pulteney is credited with bolstering sales at Airdrie-based Inver House Distillers, which reported a 19% rise in turnover to £62.9m in 2010.
Pre-tax profits at the firm, which is owned by International Beverage Holdings, remained at £9.6m as it invested in marketing and distribution – a strategy MD Graham Stevenson said will prove “highly beneficial” in the long term.
“Our turnover has shown healthy growth of 19% to £63m, with the growth of our single malt brands and new Caorunn gin contributing to this – both have performed ahead of expectations,” he said.