IF there’s one thing recent history has taught us, it’s that things don’t always work out the way you think.

John, who had more than a decade’s experience promoting techno and club nights in Glasgow and overseas, was keen to establish a base in his home city where he could host techno events on a more frequent basis.

However, things didn’t go quite as he had planned.

“It just didn’t really work out,” John told SLTN. “It was tough times. I think if anything we scared away more folk than we kept in half the time.”

It was after a “particularly tough” first few years – during which John’s friend, David Parry, became a partner in the business and “saved our bacon” – that the bar would begin to change course.

The evolution of the Bath Street bar has been heavily influenced by various team members, and it was in early 2005 that a new recruit would bring a fresh approach to the business.

Crag Carrick had a passion for live music and his preference – which leaned more towards rock than John’s techno tastes – would help redefine Bloc+ as a venue.

“It’s a scene which, to be honest, I was not really involved with in any capacity,” admitted John.

“It was a much more a rock n roll, punk, metal sort of vibe. Which wasn’t really my world.

“It totally changed what Bloc+ was and what people thought of it. The crowd changed, and just the dynamics of the venue.”

By the time Crag moved on, five years later, Bloc+ was hosting 400 live gigs a year, with performers including up-and-comers as well as established names. In 2011 the bar was named SLTN Music Bar of the Year.

“It (the SLTN Award) was all credit to him,” said John. “He’d moved away but it was all his hard work and efforts that got us where we were. And to win that award meant a lot to me personally.”

Acts that have performed in Bloc+ over the years include names such as Twin Atlantic, Frightened Rabbit and Clutch as well as a raft of local and up-and-coming bands.

John reckoned the venue’s “up close and personal” nature helped it to prove popular with acts big and small.

“There’s no barriers or anything,” he said. “It’s just a small raised area. So the bands are playing right in the audience’s face. I guess it took a lot of bands back to their roots. Particularly bigger bands who’ve come and played at Bloc+ and they loved that hot, sweaty, low-ceiling environment. That’s one of the charms of the venue, I guess.”

Core to the success of the bar’s live music offer has been the twin strategies of paying bands while maintaining an “open door” free entry policy for customers.

John said: “We pay every band, we feed every band, we water them. It’s how our business model has worked. We’re totally against the whole ‘pay to play’ ethic. I just think it’s pretty counterproductive.

“There’s some other venues – and credit to them, they run their business the way they see fit – but it’s just not my way of doing things.

“When bands have to pay a hire fee they need to sell so many tickets before they can get a gig, so they’re trying to punt tickets to their aunties and their uncles and all that.

“I’ve never seen the value in that way of generating crowds and getting people to listen to new music.

“I was always of the ilk that you do an open-door policy and then people walk in and they get a chance to see bands they would never see and never hear.

“That was the kind of Midas touch for us. It was something that really connected with the bands and with our audience. And it’s how lots of bands came to be more well known in the city.”

While live music has been the bedrock of the Bloc+ offer, it isn’t the only thing the bar has become known for. 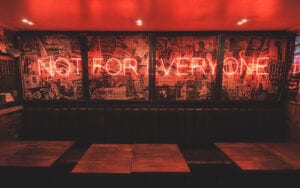 Food is another significant part of the business and signalled another shift in direction for the venue over the past decade.

While food was already part of the offer at Bloc+, eight years ago the bar was barely breaking 300 covers a week, with takings only just covering the kitchen wage bill.

“I felt like we needed to do something drastic,” said John.

“We had to change the model quite considerably.”

The introduction of daily deals was a gamble, but one that more than paid off.

On Mondays Bloc+ offers a pasta dish for £3. On Tuesday it’s a burger and fries. Wednesday is a sirloin steak for £5, with KFC-style fried chicken for £4 on Thursday and a hotdog for £4 on Friday. Vegan alternatives are provided for non-meat eaters.

Despite the low prices, everything is made fresh in the venue.

“But we charge a tenner for that same burger any other day of the week. They’re getting the same product, it’s just on a deal.”

The approach proved to be a huge success with local office workers and it wasn’t long before those 300 covers had increased to between 1500 and 1800, with sales of ancillary products such as soft drinks (not to mention customers opting for full-price menu items once they are in the venue) offsetting the low prices of the promotional dishes.

Outside of the promotions, the bar was also gaining a reputation for its unusual takes on pub staples, with Buckfast ice cream and Irn-Bru pulled pork just two of the examples.

Here, again, team members were at the heart of the success.

Danny “the mad chef” McLaren took Bloc+’s menu in some wild directions, while social media manager Halina Rifai ensured every crazy creation was communicated to the bar’s customer base.

Danny and Halina have both since moved on to other things but they were, said John, “a match made in heaven” for the bar and during their stint Bloc+’s food was featured in places as diverse as STV, MTV and Vice.

The venue has continued to develop in other ways too.

Behind the bar craft beer now plays a big part in the drinks range, with around 40 varieties between draught and packaged formats. A wide range of suppliers include New Wave, Heineken, Williams Bros, Brewdog and Innis & Gunn, with Inverarity Morton also a major supplier of drinks to the business.

Behind the scenes, too, the business continues to evolve, something John has credited to manager Chris Cusack.

“He’s been there for the last ten years and he’s really upped the game and changed the environment once again,” said John.

“It was a lot rougher round the edges when Crag was here. Chris came in and streamlined a lot of things. He took us to the next level, if you like.

The “new level” has brought a raft of new awards including, in 2019, the Late Night Venue of the Year and Independent Pub/Bar of the Year trophies at the SLTN Awards.

With recent events putting Bloc+’s 20th anniversary celebrations on hold the venue has marked its two-decade milestone with the publishing of a commemorative book.

Booc+: An Illustrated History of Bloc+ is available from the bar’s website and contains stories and recollections from a number of the bar’s team as well as a huge number of photos taken in the venue over the past 20 years.

It paints a picture of a bar that has meant a lot to those that have worked there through the years; a wild, at times anarchic place that managed to adapt and evolve as a venue and a business.

In fact, a comment John made about the venue’s food offer might be applicable to the business overall.

“We’ve got a very well-oiled machine here,” he said. “And don’t get me wrong, it didn’t happen overnight.

“This has come after years of practice.”