Cawley Hotels’ latest refurb comes on the back of record year

TO say it’s been a busy time for Alan Cawley would be something of an understatement.

When SLTN catches up with him, he has just completed the refurbishment of River House in Stirling – the sixth venue in the Cawley Group, joining the likes of Duck Bay at Loch Lomond, The Loch House in Lochwinnoch and House of Darrach at Gartocharn.

It was the group’s biggest revamp to date and one which came hot on the heels of the acquisition, refurbishment and launch of Boardwalk (the former Wheelhouse) in Falkirk.

And neither was necessarily on the horizon.

“We redid Coast [in Langbank] in June 2017, then Boardwalk the following year and River House this year – and after each of them I said ‘that’s it, we’re not doing another one’,” explained Alan, who runs the business with sister Margo.

“But I think you forget all the pain and stress and you do end up doing more; I don’t know if it gets easier the more refurbishments you do, but I think you get better at it.

“We got Falkirk done and I said that was us but then I heard about this and we had to do it. It made sense.

“Plus I grew up in Drymen so I know Stirling well – and it’s a beautiful city with so much history. 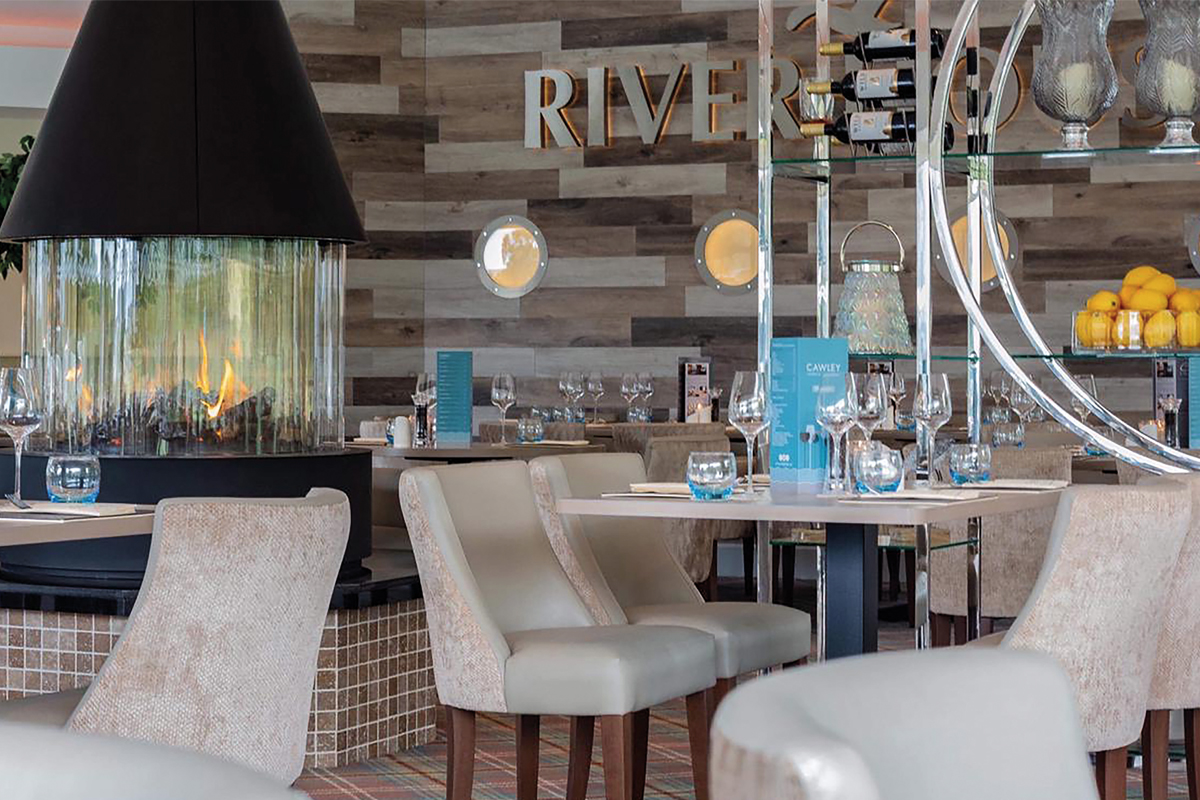 “There’s not a day I’ve not driven up here and seen the castle and monument and thought ‘wow’. So to do this place was a bit of an achievement for me; I’m proud to be part of it.”

And Alan has every reason to be proud of the latest project.

Since acquiring the unit, which is in Castle Business Park in the shadow of Stirling Castle, on March 7, the group has extended and transformed the space to create a contemporary bar and restaurant synonymous with the other outlets in its estate.

Outside, the venue – a clutch of four connected ‘roundhouse’-style buildings perched on the water’s edge – has been enhanced with a large wrap-around decking at the front and, to the rear, a decked terrace which overhangs the water and is back-lit, creating the perception the building is floating.

Lighting is also a major feature inside, with recessed mood lighting by North Star Electric, which can be altered to complement the light from the outlet’s floor-to-ceiling windows, throughout the venue.

A neutral colour palette flows throughout the adjoining spaces, while accents of colour have been used to give each its own identity.

Lounge area Bobby’s, named after Alan’s father, has a circular fire at its centre surrounded by low-slung tables and chairs sourced from BDP Contract Furniture in Hillington; while the neutral colour scheme has been enhanced with accents of turquoise and sea blue in the soft furnishings and objects.

Orange provides a pop of colour in the adjacent bar area, which is dominated by a long curved bar and features contemporary glass light fittings.

And at the rear of the venue, the two dining areas, which overlook the small loch, also have their own identities while remaining tied into the outlet as a whole. A central pink cherry blossom tree is a key feature in one of the spaces, while the other has a circular fire at its heart. There’s also a 14-cover private dining room.

And it’s not just front of house that has been completely transformed.

An impressive state-of-the-art kitchen by SW Foodservice Equipment Solutions, part of the SW Group of companies, was built in an extension to the property, incorporating large prep and store areas.

“The kitchen is next generation,” said Alan.

“We’ve got a great team and food is a big focus for us. We’re modernising all our menus. Our new executive chef Craig Hogarth is onboard and his remit initially was the launch of River House. He’s also changed the menus at Falkirk, and from here he’ll go to all the other outlets and modernise those menus.”

It comes on the back of what Alan said had been a record year for the company, which began when Bobby and Margaret Cawley opened the doors of Duck Bay in 1985.

The group, which now employs some 600 staff across six outlets, plus two cottages at Duck Bay, is on track to turnover £17.5 million this year.

“If the right site came up of course I would look at it, I’d be mad not to,” he said.

“The thing for me is that everything we have, we own; and it would need to be in the right location.

“We’ve done three in three years, which is a lot; and the size of the company creeps up on you. I mean obviously we know how big it is but I still get surprised if that’s the right word.

“It’s still a family business and that’s a huge responsibility. What drives me is the fear of losing it all.

“A lot of people have an exit strategy, but we’re in it for the long term. I love what I do.”