WHEN Jim Hughes sold The Black Bull Inn in Moffat back in 2007 after 21 years at the helm, he planned to move to Spain with wife Karen to retire and ultimately take things a bit easier.

And he did… for a few years, anyway, before the pull of family saw them return to Moffat in 2013; and it wasn’t long before Jim was helping out daughter Sasha, who ran The Stag Hotel in the town.

Fast forward a few years and Jim was again planning to retire – at the end of this month, in fact, when the lease on The Stag ends.

But, again, things changed and he ended up right back in the thick of it, launching a brand new venue in Moffat in July.

I do have a huge sense of satisfaction because we did it all ourselves.

When SLTN caught up with him at Hugo’s – a Scottish tapas bar and restaurant – last month, it was clear he’s loving every minute of it.

“It gets into your blood.

“I was planning to retire but I was walking up the street one day and I saw this building was going to auction and that was it. I phoned them straight away and they said it hadn’t sold so I paid the deposit there and then and bought the building. 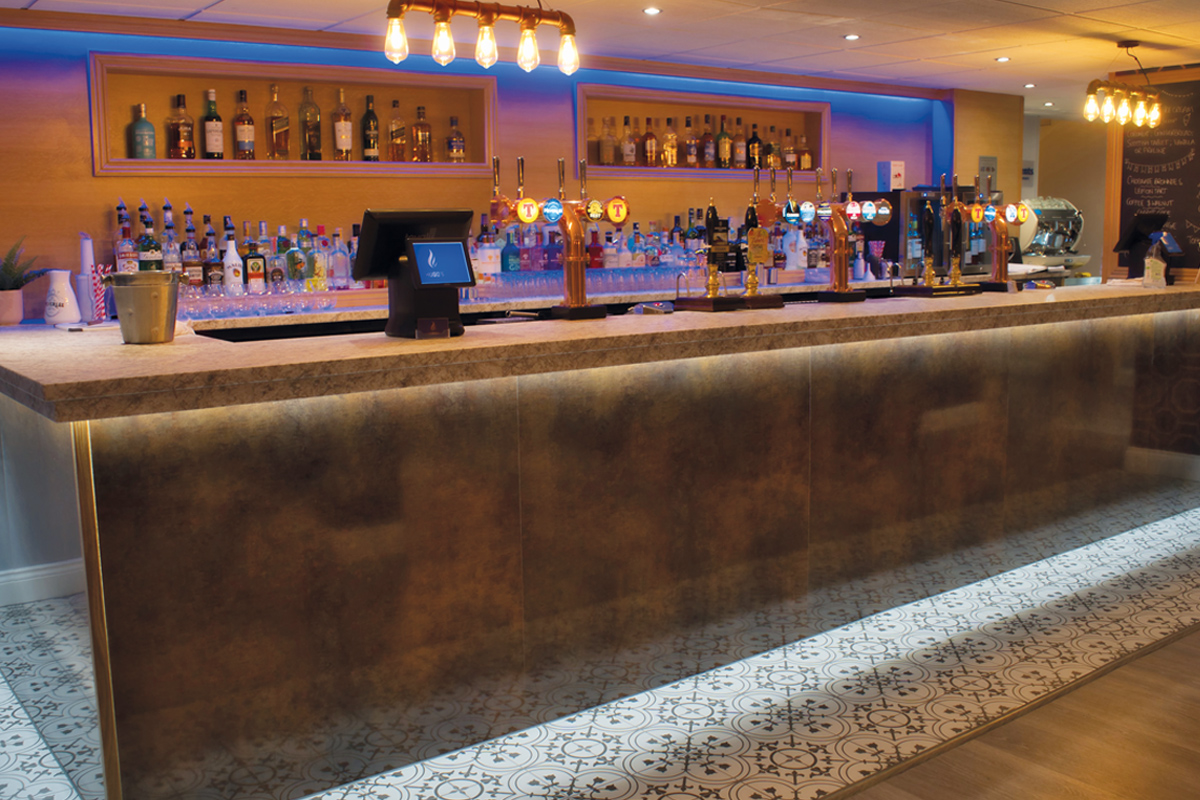 “I think there was a bit of fate in it too – just passing by and seeing that the building was going to be auctioned. Also the postcode ends HJ, which is my initials backwards so it was meant to be!

“And it’s like the building was made for this – to be a bar and restaurant.”

The Victorian property, which had been a retail outlet for the last 25 years, certainly lends itself to the current set up – but that’s thanks in no small part to the root and branch £140,000 refurbishment undertaken by the family. And Jim drew on all of his experience when it came to that.

A joiner to trade, Jim worked with friend and fellow joiner Michael Currie to carry out the full refit himself, while his decorator son Jamie brought the new look to life.

“We did the whole thing ourselves apart from the plumbing and electrics – we laid the floors, replaced 25 doors with oak doors; we were working seven days a week, it’s been exhausting,” said Jim.

“It took us five months but it was worth it.

“I liked doing it; and it meant we could change things about the decor as we went along.

“Karen and Sasha decided on the decor. Karen picked this navy and copper wallpaper first and everything else was tied in with that.”

I was planning to retire but I saw this building was for sale and that was it.

In fact, the dark blue and copper colour scheme is evident before you set foot in the building – from the tiled steps and painted railings to the signage bearing the Hugo’s name and logo.

Inside, the large floor to ceiling former shop windows flood the space with natural daylight and give diners a bird’s eye view of Moffat’s main street and famous ram statue.

There’s a mix of cream leather banquette seating and chairs upholstered in blue fabric alongside square oak tables. And the dark blue and copper theme sparked by the feature wallpaper continues at the copper-fronted bar complete with copper fonts and quirky copper pipe light fittings, while blue back-lighting highlights the range of malt whiskies and some 70 gins displayed on the hand-made oak back-bar.

The design scheme continues in the restaurant area at the rear of the property, which features a more muted colour palette; while the sports bar upstairs, which has its own separate entrance, features a paired back look allowing the giant screens to take centre stage.

Jim said the aim with the design was to “bring something a bit different to Moffat”.

“You see this sort of thing in Glasgow or Edinburgh and we wanted to bring a bit of that to Moffat; it’s something a bit different.”

The food and drink offer also seeks to bring a different flavour to the Dumfriesshire town.

On the drinks side of things, there’s a range of beers and ciders from Tennent’s, including Tennent’s, Heverlee, Pabst Blue Ribbon, Caledonia Best, Magners Dark Fruit and Orchard Pig Reveller, as well as Drygate’s Pilsner, Seven Peaks and Gladeye IPA; four cask ales supplied by Belhaven; and an extensive wine list curated by Inverarity Morton, which includes 44 wines by the glass.

It’s an offer that’s going down well with customers.

“It is quite different – the Scottish tapas, the 44 wines by the glass, the range of beers – but we wanted to do something different here,” said Jim.

“I’m used to pubs and beer and Sasha put in a huge wine order which I was a bit nervous about but it’s flying. And I never thought in my early days in the trade I’d be selling coffee and pastries!

“It’s going really well. It’s been well-received by the locals and we’ve had customers coming down from Edinburgh based on all the positive Facebook comments; we’ve had lots of compliments which is great.

“I do have a sense of satisfaction because we did this all ourselves. It’s a family business and it means a lot.”