IF the walls of The Golf Hotel in Crail could talk, they would no doubt have some stories to tell.

From meetings of the Crail Golfing Society – the seventh oldest golf club in the world which was established in 1786 at what was then known as the Golf Inn, to former landlord John Dickson – a sergeant major in the Scots Greys and Battle of Waterloo veteran who was at the helm between 1858 and 1862, the inn has played host to plenty of characters down the years.

The refurb has given us a new lease of life. It’s like buying it all over again.

And as the hostelry approaches its 300th anniversary in 2021, the significance of its history is certainly not lost on current owner Graham Guthrie.

He has just celebrated his own milestone – 30 years as owner of The Golf Hotel; his name the most recent on a timeline of landlords stretching back to the inn’s beginnings in 1721 which runs the length of one of the walls in the lounge beneath a mural depicting Waterloo.
“I am the caretaker for the next owner,” said Graham, who was named SLTN’s Licensee of the Year in 2014.

“It’s an iconic building that’s stood in this village for 300 years, through the Jacobite Rebellion, the French Revolution, the two World Wars.

“I feel so much responsibility here; it’s got emotional ties for me.

“I believe in this hotel and I don’t ever want to leave it.” 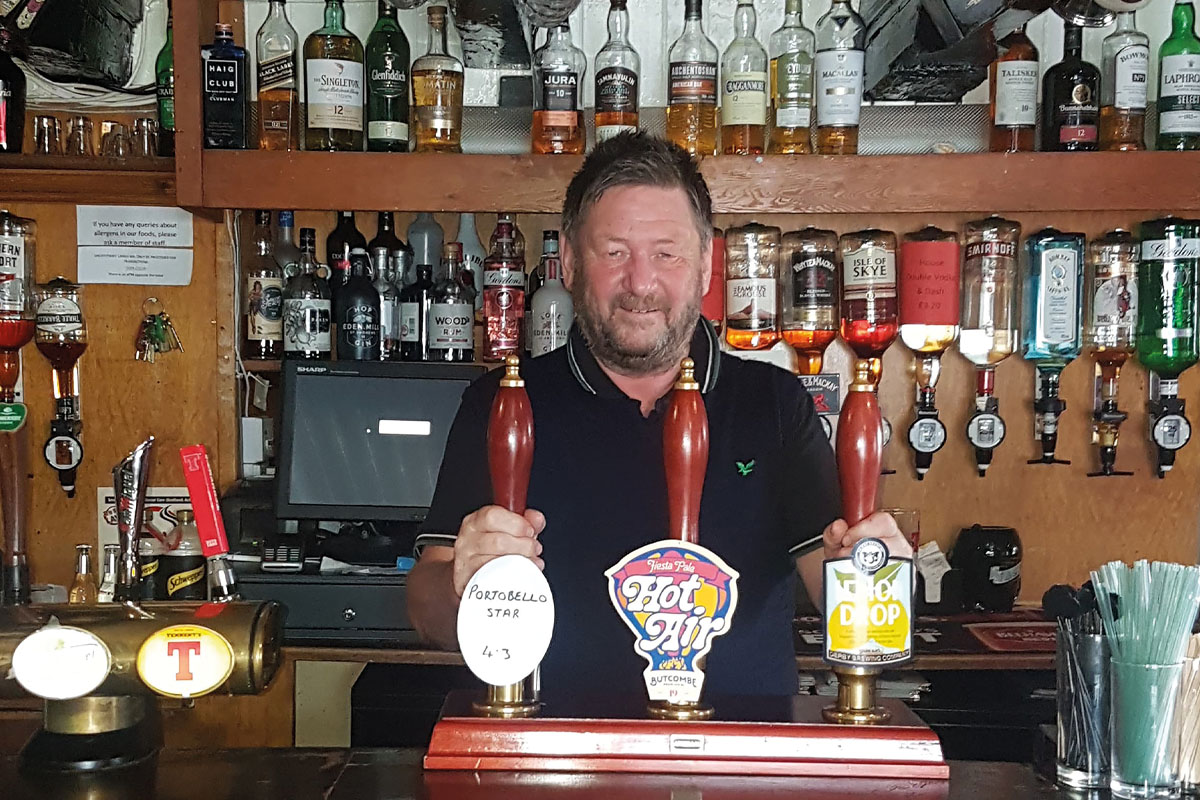 Three years ago, however, Graham was faced with that very prospect when ill health prompted him to consider his future at The Golf Hotel.

“I had a heart attack in July 2016 and thought I was going to sell up,” said Graham.
“When something like that happens you look at everything differently.

“But a year after the heart attack I thought, ‘that’s it, I’m back. I’m not going to give in to this. I’m going to revamp this hotel and leave my mark on it forever’.”

And so, in late 2017 he embarked on a phased refurbishment which has taken in every nook and cranny of the property.

Opposite the main bar area in the original part of the building, the 25-cover Waterloo Lounge is dominated by the mural of the battle and landlord timeline, and has been given a “traditional Scottish feel”.

By contrast, the adjacent 60-cover restaurant at the rear of the property has a contemporary look, with light decor, wooden floors and touches of modern tartan, alongside historic pictures of Crail.

Leading off from the restaurant is the newly-created 50-cover al fresco area which features an outdoor bar alongside tables, chairs and planters.

During SLTN’s midweek early afternoon visit a month ago, the courtyard, which had only been open for two weeks, was filling up with customers keen to make the most of the sunny weather.

And Graham said he’s already reaping the benefits of the outdoor space.
“Having the outdoor bar is brilliant – I don’t think there’s anything else like it around here,” he said.

“It will help with the operation of the business, and save staff and customers going in and out with drinks.

“I had to apply for a variation to the licence to create the outdoor bar and I have to thank Fife licensing board.

“It’s a great addition to what we offer here. It’s the last piece of the jigsaw.”

Back inside, each of the hotel’s five en suite bedrooms has been completely overhauled and named after a fellow East Neuk of Fife town or village; while the first-floor residents’ lounge has also been given a fresh new look.

The £50,000 refurbishment, which was carried out in stages over a six month period to avoid impacting on the business, is the latest in a series of developments made by Graham since he bought the hotel in June 1989.

His acquisition of the Crail business followed his co-ownership of The Haven restaurant in nearby Cellardyke for over a decade. So it’s perhaps unsurprising that one of the first changes he made at The Golf Hotel 30 years ago was to offer food all day; and food continues to form an important part of The Golf Hotel’s offer today, with the latest incarnation of the menu offering everything from breakfast pancakes to fresh East Neuk of Fife seafood.

The recent changes have gone down well, according to Graham, with the hotel attracting a “good mix of locals, holidaymakers and golfers”.

I want to be remembered as an owner that put his heart and soul into it.

And he and the 20-strong team are now gearing up for a week-long celebration to mark the hotel’s 300th anniversary in two years’ time, which will coincide with the 150th Open Championship at the Old Course in St Andrews.

“It’s a huge milestone and I wanted to invest in the hotel and its history.
“Everything I’ve done has purpose and meaning. And my decisions were right, turnover is going up.

“The refurbishment has given us a new lease of life. It’s like buying it all over again.
“I wanted to make my mark.

“I’m almost writing my own epitaph here but I want to be remembered as an owner that put his heart and soul
into it.”