More than 200,000 golf fans attended the 144th tournament, which ended this week.

But the competition, which VisitScotland claimed was worth more than £100 million to the local economy, was given a further boost after wind stopped play last Saturday. 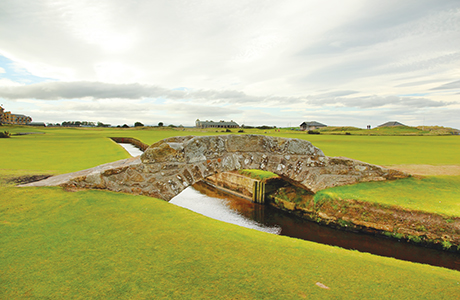 Publicans, restaurateurs and hoteliers capitalised on the thousands of golf fans who were left with no competition to watch when play was halted between 7.30am and 6pm.

At The Adamson bar and restaurant director Mike Lewis said: “It’s been an incredible week and it’s been our first Open. It’s been busy from start to finish. There were people with nothing to do on Saturday and it was a record day for us in every single aspect.”

Lewis said business more than doubled and the team were forced to draft in extra staff.

He added: “We expected it to be busy, but Saturday was unexpected and a big boost.”

Jim McClements, manager at Greyfriars Hotel in St Andrews, said the weather was “nothing but good news for pubs”.

“There was a major increase in sales on the Saturday. It got to the stage where the town’s pubs were finding it very tight to get people in.”

The picture was similar across the trade.

Phil Gauld, manager of St Andrews venue The Criterion bar, said: “We’ve roughly doubled our trade in beer sales, but we were prepared for it. The vast majority of sales have been at the pumps, but food sales have also increased by about 50%.”

Operators near the Scottish Open at Gullane Golf Club (July 9-12) also enjoyed a trade boost. A spokeswoman for The Golf Inn in Gullane said: “Our bar sales almost trebled and our dining rooms were full every night.”

Guy Campanile of Gullane restaurant The Old Clubhouse said: “We’ve seen an upsurge in trade during the Scottish Open and have also had a lot of people using Gullane as their base and travelling over for The Open.”