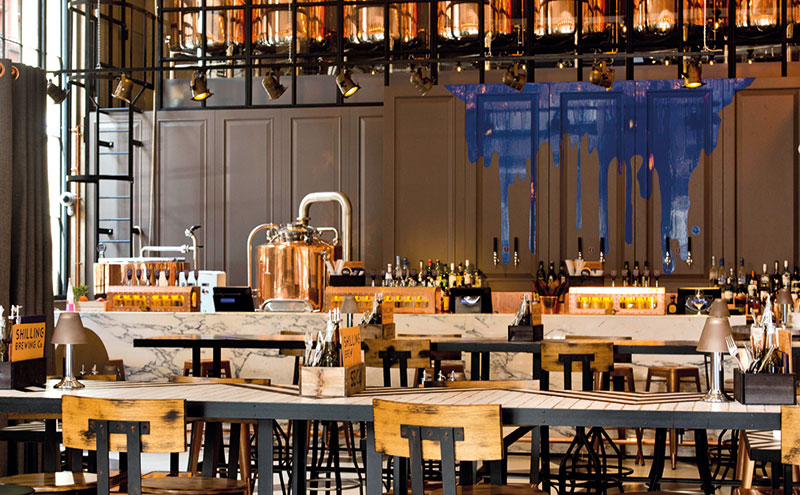 When Glendola Leisure completed its £1.5 million refurbishment of what was then Hortons on Glasgow’s West George Street in 2016, transforming it into brewpub Shilling Brewing Company, it had a simple goal: to build a loyal following of beer lovers.

Fast forward to 2019 and you need only look on beer rating app Untappd to see the brewpub’s continued success in creating interest and intrigue among craft beer aficionados.

It’s thanks in no small part to the venue’s in-house brewery, as well as its 25 rotational draught lines, reckons Chris Nicol, general manager of Shilling Brewing Company, which picked up the 2018 SLTN Craft Beer Award, in association with Keith Brewery, last November.

He said: “Basically, every time you come here, something’s changed; you’re not going to get the same [beer] selection two days in a row, which is good for the customer – and it’s just something we have to deal with.

“It’s one point of interest we do have. I know that some people have got the same number of lines as us, but in terms of changeability, I think we’ve definitely got an advantage.”

And it’s fair to say the in-house brewery has come into its own. Comprising eight brewing vessels, perched on a platform above the bar and a working mash tun and boiler operating behind the bar, it is responsible for producing Shilling’s core range, which includes: Unicorn IPA (5.2% ABV); Glasgow Red (4.4% ABV); Veetacore (a 4% ABV pale ale); Black Star Teleporter (a 4.2% ABV coconut-infused porter); and Passionista (a 5% ABV dry hopped passion fruit sour).

Chris reckons that it’s enabled the brewpub to produce between 40 and 50 beers over the past three years.

“As it stands, there’s no plans to change the core range,” said Chris.

A very different approach is taken to the other taps, however.

Beyond a couple of permanent lines for certain brewers, including Fyne Ales, Pilot, Fallen Brewing, Tempest and Tennent’s (Chris believes a city centre pub in Glasgow should always offer a Wellpark brew), every other line runs a keg of any given craft beer – and once it runs through, the line is cleaned and a new beer is put on.

Working with various suppliers, including New Wave, EeBria Trade, and Cave Direct, Chris and his team keep their ears to the ground in order to stay on top of trends.

“It’s a relationship game for us,” he said.

“We’ve found that out, largely in the networking and things we do tend to get a heads up a lot more now than we used to certainly whenever there is something good on the horizon.

“So it’s that and a lot of the staff are really keen and as soon as we hear about something we just need to chase it and try and get it.”

Staff knowledge is another major focus for the Shilling team, with an in-house trainer hosting fortnightly training sessions covering all manner of topics – from beer styles and tasting sessions to brewery updates.

“We’re able to take them to other breweries as well, ones we use directly,” said Chris.

“We’ve got a lot of breweries that we work with who are happy to come in and do little tasting sessions for the guys as well, so they’ve got a lot of exposure to things they wouldn’t ordinarily.”

I think we have a bit of a duty to showcase the best of Scottish beer in here.

These measures ensure that staff knowledge is on point, which ultimately benefits the customer experience, according to Chris.

“If we can get someone to try a new beer, that’s a great thing for us to be able to do,” he said.

While keeping up with trends can be a challenge, it’s one the Shilling team readily embraces. Chris reckons that sour beers are continuing to gather pace, as well as barrel-aged beer using wild yeast strains.

“It’s good to be on top of things and be able to have access to really good beer,” he said.

“I think we have a bit of a duty to showcase the best of Scottish beer in here, so that’s what we try and do.”