First vodka to be produced on the island is launched

PROVENANCE is at the heart of what’s said to be the first vodka to be produced on the Isle of Skye.

Triple-distilled in small batches, the 40% ABV vodka is made using water from the Storr Lochs, three miles away from the distillery. 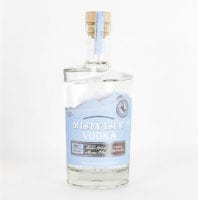 The new spirit is described as having a light, refreshing taste, while the bottle features a ridge design inspired by the rugged Cuillin mountains on Skye.

Misty Isle Vodka is the fourth release from Isle of Skye Distillers, which was founded in 2016 by brothers Alistair and Thomas Wilson, and joins Misty Isle Gin, Tommy’s Gin and Misty Isle Mulled Christmas Gin.

Alistair said producing a vodka has been an ambition since they set up the distillery three years ago.

“While gin is our signature product, the launch of Misty Isle Vodka helps show not only how diverse our small-batch distillery can be, but also the quality of the spirits which can be created with local botanicals harvested in Skye,” he said.

“As with our Misty Isle Gin, provenance is everything to us; every part of the production process for Misty Isle Vodka, from distilling right through to bottling and labelling, takes place in Portree.”