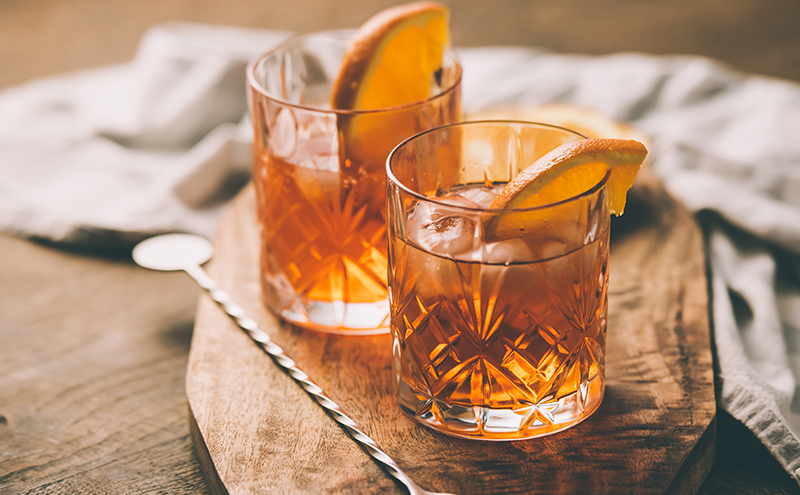 THE classics are classics for a reason and there are very few, if any, cocktails as quintessential to mixology than the Old Fashioned.

Indeed, the first documented use of the word ‘cocktail’ appeared to be a rudimentary recipe for an Old Fashioned, featuring in a New York newspaper, The Balance and Columbian Repository, in 1806.

The paper’s editor described a cocktail as a “stimulating liquor… composed of spirit, sugar, water and bitters”.

Over 200 years later, with cocktails booming, the Old Fashioned has established itself as one of the most popular serves in the world.

Dan Bolton, managing director of Hi-Spirits, reckons the whisk(e)y-based drink’s success can be ascribed to its simplicity and versatility.

“The Old Fashioned is very much considered the signature serve for bourbon by cocktail enthusiasts, and consumers expect to see it on the drinks list in any bar that takes cocktails seriously,” he said.

“Consumers enjoy the history and heritage of premium drinks and the Old Fashioned has very deep roots in cocktail culture.

“It’s also the basis of many cocktails that followed it, so can be endlessly adapted by and customised by bartenders.”

Teddy Joseph, whisky specialist at Edrington-Beam Suntory UK, said some of the evergreen serve’s acclaim is attributable to the glamour of those who have drunk the cocktail in films and on TV.

“The Old Fashioned is one of the most popular cocktails in the world, adorning cocktail lists in bars and restaurants across the globe,” he said.

“Whilst it’s always been a firm favourite amongst consumers, it’s certainly enjoyed revived popularity since films and TV series like James Bond and Mad Men have glamourised it.”

A great Old Fashioned needs to be made slowly to get the right level of dilution and intensity.

What’s for certain is that consumer proclivity for ordering Old Fashioneds means that bars which offer the serve must be able to make them well, said Bolton of Hi-Spirits.

“It’s very much comparable to the G&T in terms of being a test of a bartender’s skill, it’s a relatively simple drink to prepare but also it’s very easy to find a bar that serves one poorly,” he said.

“A great Old Fashioned needs to be made slowly to get the right level of dilution and flavour intensity, which is why it tends not to work so well in mainstream bars where there isn’t always the time or skill.”

And while the standard Old Fashioned is in high demand, interesting twists on the serve can be easily made to add a level of intrigue and display a bar’s flair for mixing.

“When it comes to the bar, I think it’s really important that bartenders offer customers something a little bit different to really set themselves apart from the crowd,” said Joseph of Edrington-Beam Suntory.

“Bartenders can experiment and innovate with classic cocktails such as the Old Fashioned by offering it with a twist – subtle changes such as using different bitters and whisk(e)y can completely alter the taste, offering a different experience for consumers.”

Bolton of Hi-Spirits agreed, but cautioned that bars must be able to produce good standard serves before branching out and experimenting with new ones.

He said: “Once a bar is confident it can make a basic Old Fashioned to a high standard, it can definitely pay to offer customers interesting and creative twists.

“The best advice though is that it’s always better to do a few cocktail serves well than to offer a broader range but disappoint with mediocre serves.

“An Old Fashioned menu offering different whiskies as the base, as well as adding other twists, is fine as long as bar staff understand the flavours of each whiskey, and can discuss each serve with confidence.”