The bar that launched a group has marked ten years in business. Dave Hunter reports 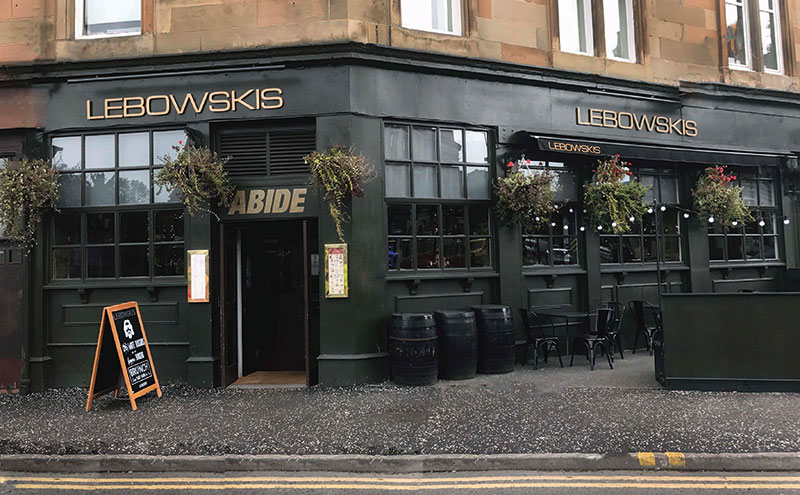 It’s a line familiar to anyone that’s seen the Coen Brothers’ famous film, The Big Lebowski, and probably even a fair few that haven’t. It’s also so much more than just the main character’s catchphrase; it’s an entire philosophy.

When friends Graham Suttle, Scott Arnot and Mo Clark decided to open their own bar in 2007 the core concept was very much informed by The Dude’s legendary laid-back approach to life.

“The name arose from what we wanted the venue to do, which is be really chilled out, like the character in the movie,” Suttle told SLTN.

“We didn’t want it to be a theme bar but we wanted to take the best of what that character meant to us: this laid-back guy who enjoyed the finer things in life: music, food and booze.”

The Dude would also be central to the venue’s drinks offer, which would have a strong focus on White Russians – favourite of the great man himself.

Lebowskis opened its doors late that year on Glasgow’s Argyle Street, in the former Elbow Room.

It’s fair to say the venue didn’t arrive with a bang.

However, the Lebowskis offer of White Russians and locally-sourced pub food soon struck a chord with the Glasgow clientele.

The venue’s growing popularity was no accident, said Stephen Martin, whisky ambassador for Diageo Reserve, one of the venue’s suppliers.

“There’s no bar in the world that is incredible at everything and when I see successful operations today they all have one thing in common – they do what they do better than everyone else around them,” said Martin.

“Lebowskis is still packed with customers who feel the bar’s light-hearted, pre-hipster approach reflects their own values and ideals.”

Hayley Tait of another of Lebowskis’ major suppliers, Dunns Food and Drinks, agreed. She reckoned the owners and their team established themselves as “tastemakers” with the opening of the venue.

“From the classic White Russian to some colourful and dynamic creations, [the team] have really cemented themselves as skilled and creative cocktail makers,” said Tait.

“Their trend-focused food offering has also definitely kept them at the forefront of dining in the last ten years.

“With award-winning burgers and local speciality dishes, [the company] knows what the consumer wants and tapping into this insight will continue their success in the future.”

The popularity of the venue was succinctly summed up by Mark Harris of Pernod Ricard UK, when he praised the outlet’s “focus on quality in a fun, welcoming environment”.

While the inspiration for the outlet came from a laid-back character, it’s safe to say plenty hard work went into making Lebowskis a success.

Customer service was placed squarely at the heart of the venue.

Suttle said: “When you walk into a bar the first thing that makes you sit up and take notice is a warm welcome. And we made sure that was at the forefront of everything we did.

“It was a warm welcome and then it fed into our food, our drinks and then we started to build a following around great service and really [selling] people on the fact that we had time for them.”

While the food and drink have proved consistently popular over the past decade, it’s this focus on the customer that Suttle believes is behind the success of Lebowskis.

Since 2007 Suttle, Arnot and Clark’s company, Kained Holdings, has opened two more Lebowskis venues – one in Edinburgh, the other on Glasgow’s south side – as well as six other outlets across Glasgow.

And Suttle said the ethos established at Lebowskis ten years ago runs throughout the group.

“It’s worth noting for anyone getting into the business, it’s really about the team, and it’s so important for your team to understand the ethos of the business,” he said.

“Pubs are struggling right now and, even more so now, people need to work on service and make sure everyone is happy.”

With that philosophy at its heart, Lebowskis has been keeping customers happy for over a decade.

It doesn’t just survive. It abides.