WITH two outlets already trading at the Finnieston end of Glasgow’s Argyle Street, the team at Kained Holdings is well-versed in transforming the area’s historic buildings into stylish bars and restaurants.
The operators were among the first to set up camp in a part of the city which now boasts a number of small independent bars when they launched Lebowskis in 2007, following that with The Finnieston in 2011.
Now the group’s directors – Graham Suttle, Scott Arnot and Mo Clark – have reinforced the firm’s presence in the area in which their business began with the launch of Porter & Rye, right next door to The Finnieston.
When SLTN caught up with Graham at Porter & Rye earlier this month, it’s clear the group’s appetite for launching new outlets is far from diminishing. 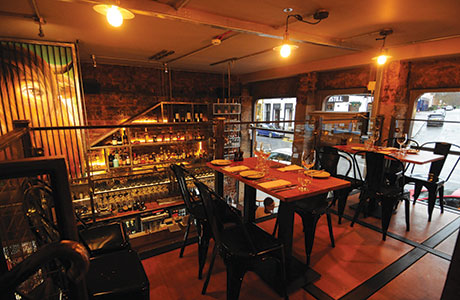 The latest outlet to join Kained’s stable, which also includes the Crafty Pig on Glasgow’s Great Western Road and a Lebowskis in Edinburgh, Porter & Rye majors in beef, which is sourced from Gaindykehead Farm in North Lanarkshire via Glasgow-based Rodgers Butchers and dry-aged on the premises (see box right). The style of food not only differentiates it from its seafood-focused sister outlet next door, it provided the inspiration for the venue’s design.
Graham explained that it’s a concept he’s had in mind for around four years; it was just a question of finding the right site and time to launch it.
So when the lease for the former Taste of Punjab restaurant and takeaway became available around 18 months ago, he and his business partners moved to acquire it. The site required everything from planning permission and listed building consent to a premises licence, so it was to be more than a year on from then before work on the refurbishment got started.
“I think this is the most challenging project we’ve done because of that,” said Graham.
“I think it’s the first one where we’ve had to go in for everything, including the licence.”
The project also saw Kained Holdings take a new approach to the refurbishment.
Having designed and managed previous refurbishment projects themselves, the team enlisted designer Geraldine Crossan of Geraldine Crossan Design and contractor Hugh Stirling to work on Porter & Rye.
“It was largely because of time commitments – I couldn’t be here every day so we took on a contractor,” Graham explained.
“It was a learning curve. I’ve always done it so it was interesting for me to work with someone else. The process was very smooth from start to finish.
“It was the same with the design. The style of our other outlets has come from my head so this was a new approach. I wanted to understand the process of how it went from my head to reality.
“I met with Geraldine, she listened to my ramblings, came back with drawings and she hit the nail on the head; she got exactly what we were trying to do here.”
Once the relevant permissions were in place, work got underway last October, with the outlet opening on December 23. It may have been turned around in just a couple of months, but the £300,000 refurbishment took in every aspect of the site, which was stripped back to the stone walls and joists.
The ‘field to plate’ concept was central to the design, said Graham.
A glass-fronted dry-ageing cabinet, which was shipped from Italy and cost £10,000, takes centre stage in the venue, allowing diners to see the beef at different stages of the ageing process; customers can also see their steak being prepared and cooked in the open kitchen at the rear of the premises. 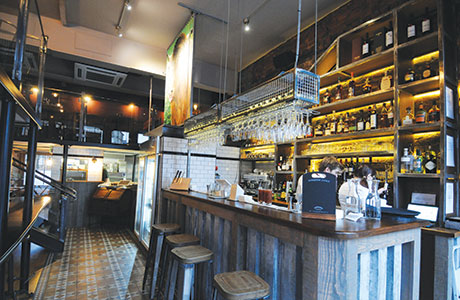 Other design features in line with the ‘farm to fork’ philosophy include a bar frontage made from corrugated shed roofing and wooden gate posts; a drinks shelf designed to resemble a knife handle with a layer of steel sandwiched between dark wood; metal farm gate-style ‘dividers’ between booths; and barn-style light fittings in each of the booths set on the exposed stone wall.
There’s also a large picture of a cow known as ‘Jojo’, which was created by a local artist, suspended above the meat ageing cabinet.
Designer Geraldine Crossan said Graham “knew exactly” what he wanted Porter & Rye to offer.
“After our initial discussions I produced an artistic impression of the space which allowed Graham to visualise exactly how his new venture would look, delivering the style and character he was aiming for,” she said.
It wasn’t just the style of food that had a bearing on the design.
Clever use of space which afforded maximum flexibility was a key priority in the 56-cover premises.
To achieve this, a combination of loose and fixed seating was used throughout.
Three large booths upholstered in black leather, by LECS, line the wall opposite the bar, while a space at the rear of the outlet, which can be curtained off to offer private dining, features banquette seating in dark brown leather, black metal chairs and loose tables of two and four, giving flexibility to the configuration of the area.
Upstairs, a similar approach was taken to furnishing the two mezzanine levels, which each feature a glass balcony overlooking the main floor. One features bench-style fixed seating upholstered in black leather, while the other has a mix of two-person booths with brown leather seating and loose tables and chairs; toilets are located on the upper level, with a disabled toilet on the ground floor.
Graham said making the most of the available space was the overriding aim.
“It is a small unit so the idea was to maximise the space,” he said.
“Booths and tables were used to make the space as flexible as possible.
“It was always about the ageing cabinet; that was always going to be the centrepiece next to the bar so customers could see the meat, choose the meat and how long they want it aged for in advance – it’s all about giving people an experience.”
Even the drinks range was designed with the menu in mind.
There are ten craft beer lines and a range of bottled beers, most of which are Scottish. On wine, Kained Holdings worked with Inverarity Morton, Hallgarten Druitt, WoodWinters and Wine Importers to create the “carefully-selected” list; spirits, meanwhile, which major in whisky, were sourced from Inverarity Morton and Hotsauce.
Graham said the offer is going down well with customers.
“It’s been non-stop since we opened,” he said.
“As with all of our outlets, we want to deliver a maximum experience for the customer at a reasonable price.
“It’s about enjoyment and theatre; it’s not overbearing or stuffy.
“Porter & Rye was a collaboration between a lot of people and we’ve ended up with a cracking unit.
“I’m really excited about it.” 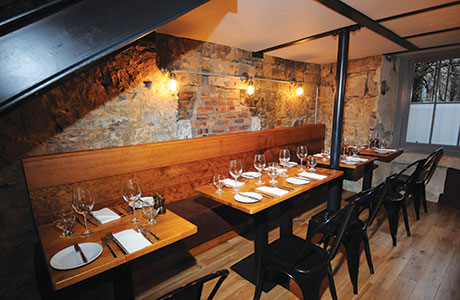