PREPARATION is the name of the game when it comes to the Six Nations – and that’s as true for pubs as it is for players.

From pouring perfect pints and food pairing to delivering an unbeatable viewing experience, there’s no shortage of elements that operators need to get right in order to draw customers in and make the most of screening the rugby tournament, which kicks off on February 3.

But get the offer right and it’s operators whose cheers are likely to be the loudest, according to brewing giant Heineken.

Quoting figures from Vianet – which monitored drinks sales at 100 Heineken-owned Star Pubs & Bars outlets during the 2017 Six Nations tournament – it found that pubs screening sporting tournaments can achieve an uplift in beer and cider sales of up to 40%.

Jerry Shedden, Heineken on-trade marketing director for the UK, said while the benefit of screening this year’s Six Nations is clear, operators need to put in the work to tempt customers from staying in the house to watch the tournament. 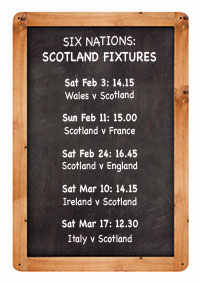 “The opportunity big sporting occasions bring for pub and bar operators is clear when you look at the sales uplifts achieved during [last year’s] Six Nations,” said Shedden.

“But in this day and age, with home entertainment systems and dining delivery services so sophisticated, it’s vital that pubs put the effort in to create a fun, lively atmosphere to get punters off the sofa and through the door for matches. It may seem like a big effort, but those that do it well are the ones who are reaping the rewards, as these results show.”

Therefore, offering a beer selection which appeals to the rugby crowd is important, brewers told SLTN.

Paul Fallen, owner of Fallen Brewing, said ‘session’ beers, around 3.9% ABV to 4.1% ABV, are likely to be crowd pleasers, adding that “light, easy drinking blondes and pale ales that can be consumed in reasonable volume” are likely to be popular.

Operators would also be wise to offer a selection of “good quality cask beers”, which Fallen said “always attracts a good proportion of the rugby crowd”.

Clive Chesser of Belhaven owner Greene King agreed. He said: “Cask beer remains particularly popular amongst rugby spectators and those with long-standing sponsorship associations to the sport such as Greene King IPA are the go-to beers for most rugby-watching punters.

“Limited edition cask beers created for a sporting occasion, such as Belhaven’s Grand Slam, not only deliver a striking presence on the bar, if they are from a brewery that consumers love and trust, they can make a big impact on sales.”

And for licensees who don’t have cask ale facilities but wish to offer it during the Six Nations, Fallen of Fallen Brewing reckons they can often come to an arrangement with local microbrewers, saying that “many/all of whom have mobile bar facilities would be more than happy to take a pitch on game days”.

Outlets should also consider “pushing packaged beers (bottles and cans) in order to reduce serving time and cut down on glassware”, according to Andrew Chapman of Keith Brewery.

The origins of the beers and other drinks on offer is another clever way of profiting from the opportunity afforded by the Six Nations, reckons David Mee of McEwan’s owner Marston’s.

He said giving customers a choice “is key”, adding that stocking “selections of beers in reference to the nations playing throughout” is a good way of capitalising on the games.

Chapman of Keith Brewery echoed this view, stating that the Six Nations “allows you to push brands and international beers that you may not generally stock”. However, licensees must ensure their screening of the matches “are well promoted both on your premises and across any social media platforms that you use”, he said.