Cold beer and warm weather have long been the perfect match

A COLD pint on a warm day has been a staple of pubs and bars for decades and, even as the beer category changes and evolves, this seems to be as true today as it’s ever been.

While the world of on-trade beer is arguably wider and more complex than ever before, there are some fairly straightforward steps licensees can take to ensure they are ‘match-fit’ to make the most of any unexpected sunshine. 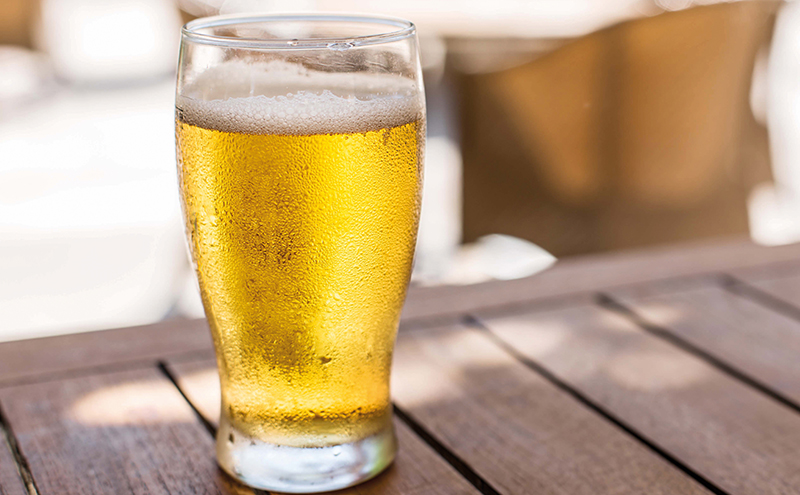 And in Scotland, when is it ever anything else?

Jessica Markowski of brewing giant AB Inbev said the unpredictable nature of the UK’s weather means that when the sun does break through the clouds, it actually has the ability to change people’s plans and habits.

“In the UK the weather is so changeable, if there is a sunny weekend, or even day, people often become more reactive in their shopping habits in order to make the most of the sunshine,” said Markowski.

“As an impulse or reactive purchase, consumers tend to visit their local convenience stores or local pubs and bars for immediate consumption.”

He said that during the summer alcohol, and beer in particular, “takes on a different role and significance”.

“The perfect refreshment during the warmer months, beer is the go-to for many: a staple of any beer garden on a balmy evening,” said Mills.

The perfect refreshment during the warmer months, beer is the go-to for many.

He added that beer should be given prominence throughout the summer via blackboards and through visibility in fridges and bar-tops.
And quality is just as important as at any other time of year.

Mills advised licensees to ensure they can provide the ‘perfect serve’ throughout summer, as this can help differentiate outlets with similar offers.

“As always, we’d recommend that outlets change their glasswasher water daily and ensure it is topped up with detergent and rinse aid,” said Mills.

“Ideally, outlets should wash glasses then let them sit out to dry, and not polish them as the residue from a dish cloth will affect the drink.”

Pubs with outdoor areas should ensure they are kept clean and tidy and consider allowing customers to book them in advance, advised Fi Leonard, customer marketing manager at Tennent’s.

“Summer has several sporting events that can provide a platform for visitors to the on-trade to drive extra footfall,” she said.

“Tennis is hugely popular for Scotland these days and Wimbledon is underway.

“This year’s tournament will be really exciting as Andy Murray looks to defend his title, and we’re sure all of Scotland will be watching.

“Advertising any TV coverage of the tennis in advance will let your customers know that they can soak up the atmosphere, watch it in bar and enjoy a refreshing beer.”

Brewers said the coming weeks should provide ample opportunity to grow sales of various beer styles, ranging from real ale to world and mainstream ‘big brand’ beers, and licensees were advised to stock a balanced range of each.

Markowski, of AB Inbev, said: “It’s important for licensees to stock a range of brands and beers to suit different occasions and customer needs and tastes – from small craft beers and local favourites to global and premium brands.”

The changing tastes in beer were illustrated by Karen Moore at Kelburn Brewery, who said: “I think when we first started the real ale drinker was probably the stereotypical middle-aged man with the beer belly and the beard.

“But now everyone drinks beer. More young people are drinking it. It’s shifting – with students and other young people coming in.

There’s no denying that craft beer, in particular, has been making waves in recent years.

“Consumer excitement for products created with craftsmanship and character has brought a new energy into the world of beer,” said Guy Dodwell of Diageo.

This was echoed by Liam Newton of Carlsberg, who said craft has “injected a new energy into the beer category”.

With so many craft products available it can be difficult to know where to start, but the wide range of craft beers available in packaged formats means licensees don’t have to take a gamble on introducing products in keg or cask that may take a while to get established – or if they have limited flexibility on their draught beers.

“For landlords who are ‘tied’ on their draught range, stocking craft cans and bottles from local breweries can be a great opportunity to capture some of the craft share of the market,” said Jo Stewart of Stewart Brewing.

Bottles and cans also make it easier to swap in different beers in order to keep their craft range fresh – something that can be particularly useful when appealing to a fickle customer base.

Keith Bonnington of Colonsay Brewery said that craft beer drinkers tend to “drink across a repertoire” rather than sticking to one specific brand.

David McGowan of Broughton Ales encouraged publicans to contact breweries near to them for help in bringing their local/craft range to life.

“Be proud of Scotland’s brewing history and use it to engage customers to trial something different and get an up-sell,” said McGowan.

“Get to know your local brewer, and they will help you understand Scotland’s unique brewing heritage.”

Inspiring bar staff and encouraging them to take an interest in local beers was said to be key to growing sales of these products.

“Simple things like where is the brewery from, what style the beer is and one interesting fact about the beer can be enough to up-sell a customer from their usual pint to something more adventurous.”