LICENSED venues on one of Glasgow’s best-known streets are set to benefit from its “transformation” after the city council approved a multi-million pound project to improve Sauchiehall Street.

The famous street will now be remodelled following the decision of the Glasgow City Region City Deal to approve development proposals and release £6.5 million in funding. 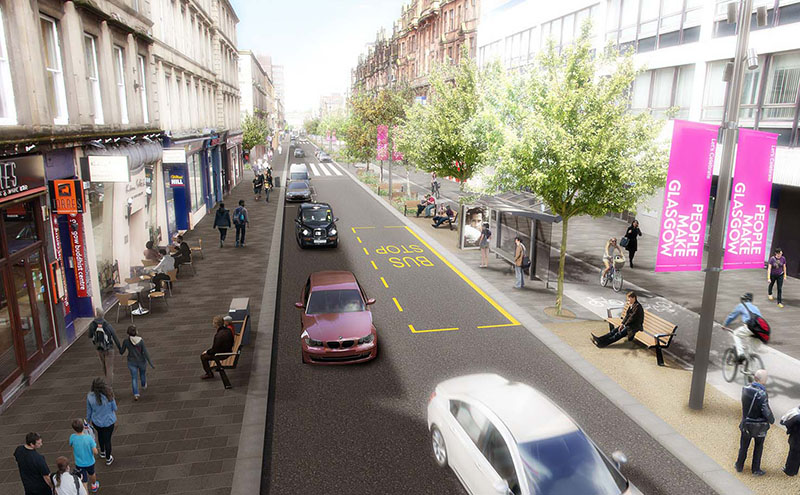 The council said the plans will support commerce by creating a “vibrant district” with increased footfall.
A wide-ranging group of companies in favour of the changes formed the Sauchiehall Street Business Improvement District (BID) intending to promote the plans and position the street as “Glasgow’s premier entertainment destination”.

He said: “I think the project will be a real game changer for the area. It will completely change the landscape and will hopefully create a space that allows all those using Sauchiehall Street to benefit from it.
“One of the BID objectives was to improve public realm. So we are really happy the work is going ahead.”
The improvements to the street will include intelligent street lighting, an avenue of trees, segregated cycle lanes, increased pedestrian space and reduced street clutter.

Work is expected to commence within the next few days and is anticipated to last around 12 months.
Eight similar development projects are planned across the city.
Glasgow City Council leader, Susan Aitken, said the project “is great news for the city, and will transform this vital part of the city centre”.

Leader of Glasgow City Council and chair of the Glasgow City Region City Deal Cabinet, Susan Aitkin, said: “This approval of the full business case for the Sauchiehall Street project is great news for the city, and will transform this vital part of the city centre.

This scheme will be the first visible example of what this City Deal will do for Glasgow, and will leave the Sauchiehall Street area better-connected, with improved cycling and pedestrian infrastructure, and offering more and improved sites making this an even more attractive location for businesses to invest in.”
Work is expected to commence over the next two weeks and is anticipated to last around 12 months, creating 92 construction jobs. Eight further similar development projects planned across the city.