IT has been a long voyage for Declan Curran; one leading from his hometown of Wexford, in the south of Ireland, all the way across the Irish Sea and up the Firth of Clyde stopping off in Paisley before setting off again through the hills and lochs of Argyll to the picturesque enclave of Oban.

The passionate Irishman now says he is “living the dream” after becoming his own boss as owner of The Lorne, the bar he managed for two different pub groups between 2004 and 2015.
After over a decade of running the pub for others, Curran now has complete freedom – and he said he’s loving every second of it.

However, his journey to bar owner has been a long-served and hard-earned apprenticeship.
Curran’s trade career began as a teenager working for Stena Line on its ferries, where he said he “learnt everything to do with hospitality, starting off as a kitchen porter then working in the first class restaurants”.
A Scottish bride brought him to these shores and, after six years as a general manager for Maclay Inns working in the town of Paisley, Curran wanted a change of scenery.

It doesn’t get any fresher than buying seafood down at the pier.

“I had a baby girl who was just turning one and I was looking for somewhere to settle down,” he said.
“I then came across an advert in a Sunday newspaper saying The Lorne bar in Oban was looking for a general manager. It was part of my group and they were advertising the position so I applied for it and fortunately I got it.”
While Curran admits it took him a while to get to grips with the seaside town, the trained chef was quick to make his mark on the venue.

“I wanted to develop my own menus; seafood-based, using local produce,” he explained.
“I was able to do that and then we started getting a name for ourselves. The tourists loved it and it was probably our most successful trading period before I actually bought the place.” 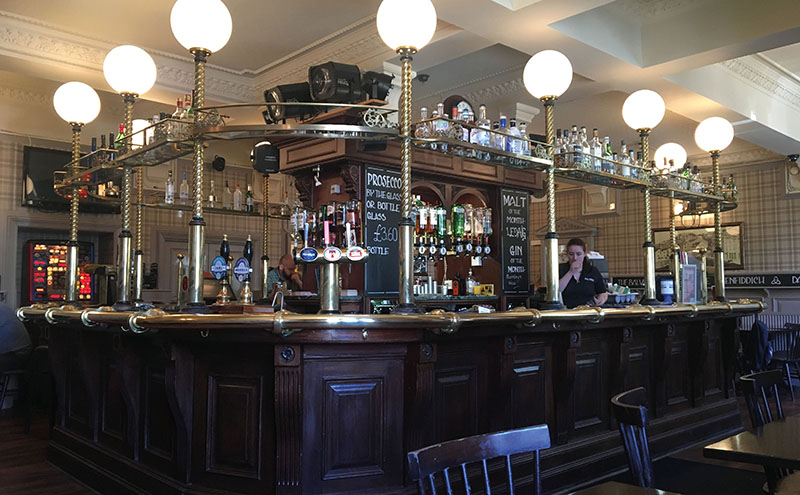 Following the collapse of Maclay, Curran hoped to snap up The Lorne but pubco Stonegate promptly stepped in to buy it as part of a group of 15 Maclay sites. Fortunately for the current owner, Stonegate decided to off-load The Lorne and, in his own words, Curran was “in there like a shot”.

He was able to purchase the freehold of The Lorne, self-funding with the backing of a private investor, but he knows others aren’t as fortuitous. Curran pulled no punches on the subject of bank funding for aspiring entrepreneurs, describing what he saw as a lack of support for licensed trade businesses as “very sad for many individuals such as myself, who have what it takes to succeed in business but do not have the opportunity to go it alone”.

With his own opportunity secured, Curran knew exactly what he wanted to do and how to execute it.
“I was in a unique position with The Lorne because I’ve watched it over the years, I knew what would work and what wouldn’t work,” he said.

One of the biggest changes under Curran’s ownership has been in the food.
Of course the town’s rich maritime history, with fishing boats regularly coming and going, lends itself perfectly to a bar specialising in great seafood.

And The Lorne is making use of as much local produce as possible.
“It doesn’t get any fresher than me walking down to the pier in the morning and getting a couple of kilos of scallops or mussels and then they’re back in the bar within five minutes and sold by the end of the day,” said Curran.

I was in a unique position here because I knew what would work.

“I’m not just living a bar owner’s dream, I’m living a chef’s dream too right now and what a difference it’s made.”
It’s certainly evident in the figures.
In Curran’s first year of trading, food sales increased by 65% and wet sales were up 24% without any meaningful investment in the business, while the food to wet sales split has gone from 15%-85% to 40%-60%.

As a result of a successful first year, he subsequently reinvested the profits made back into the business with the 50-cover bar’s first refurbishment in almost 15 years the result.
There have been changes in The Lorne’s staff too.

The bar employs seven full-time and eight part-time staff, two of which worked with Curran when he managed the pub; the former head chef is now the bar manager and former assistant manager, Debbie Sheppard, is the front of house and marketing manager.

With the changes at The Lorne having gone down well with both locals and tourists, Curran said he is now looking forward to another summer at the helm.

In the busiest weeks of the season, tourists more than double Oban’s population; and while some in the industry have been concerned about Brexit’s impact on tourism, Curran sees potential for a spike in visitors – from home and abroad.

“I don’t think leaving the EU will cause a decrease in tourism,” said Curran.
“We’re very fortunate, that where we are in the Scottish Highlands is safe.

“All the commotion going on all over the world makes Oban a more attractive holiday destination for our own people from the UK. I think Brexit will cause an increase in people from the UK holidaying up here; if you get a run of weather like this, there is absolutely nowhere better to be on holiday than Oban.
“There is a lot of competition for tourists but if you get the food right, the service right and the ambience right, you should be successful.”

As the ferries set off from Oban harbour – just a few hundred yards from The Lorne – for the man who started out as a ferry kitchen porter, it must seem like a million miles away.