Opening of capital comedy club was a major project

Transforming a weekend comedy night into a full-time, stand-alone venue was ambitious to begin with, but when the venue in question had to be completely refurbished beforehand, that project became a great deal more challenging.
Monkey Barrel Comedy Club was an established Edinburgh comedy night running on Friday and Saturday evenings above Grassmarket pub the Beehive.

After several years building its reputation as a year-round destination for stand-up comedy, organisers Ben Verth, John Millar and Chris Griffin decided to take the Monkey Barrel brand and create a full-time comedy club in the city.

Beer is a big focus in the main bar area.

An exhaustive search of the capital yielded a premises on Edinburgh’s Blair Street.
However, the unit had two drawbacks.

The first was that the Blair Street space – rented on a 15-year lease from a private landlord – was bigger than the team had originally envisaged, with both ground floor and basement levels.

The second, and much bigger problem, was that it had never housed a licensed premises and, most recently, had been used as office space.

With a considerable project ahead of them, the team was joined by a fourth director, David Bleese, a former banker who invested in the business and, together with the other three owners, turned his hand to transforming the space into a full-time licensed premises.

“John, in particular, had spent a long time trying to find a room big enough to hold a hundred people,” said Bleese.
“There aren’t many left in the city – any building of any size or stature is very quickly snapped up by national or international operators, or they’re just kept in private hands.”

With the clock ticking until last year’s Edinburgh Festival Fringe the team decided to split the refurb into two stages.
The first, pre-Fringe, stage saw the directors focus on the smaller basement space in order to get it open for the start of the festival. Though smaller than the ground floor area, the basement still required considerable work, including the conversion of a former boardroom into a beer cellar. 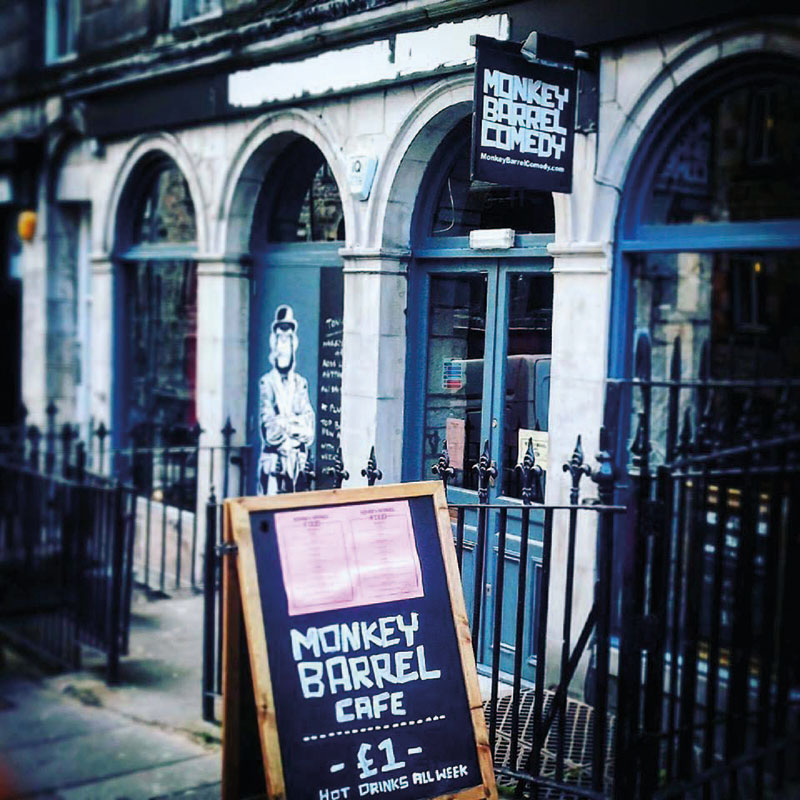 “I think we’ve probably got the only cellar in the country that has wood panelling,” said Bleese.
After the festival the outlet shut again and, in October of last year, the refurbishment of the larger ground floor space got underway.

It was a considerable project, involving, among other things, the construction of toilets and a new ground-floor bar with a dozen beer lines.

Beer is a big focus for the main bar area; Heineken, which assisted with the creation of the beer cellar, is draught supplier, with brands including Amstel, Heineken, Birra Moretti, Sagres, Lagunitas, Caledonian Coast to Coast Pale Ale and Affligem as well as Founders Reserve cider.

In the fridges there is a wide selection of craft beer bottles and cans from specialist suppliers New Wave Distribution and Fusion, as well as direct from brewers that include Stewart Brewing and Brewdog.

A small but select range of wines is provided by Great Grog, with spirits bought from a local cash and carry and Edinburgh producer Pickering’s.

During the day the venue operates as a cafe, hosting entertainment such as book readings, poetry and spoken word performances. On the food side, the menu is limited to paninis, cold meats and sandwiches, though additional food can be bought in if pre-ordered.

At 5pm, the venue shuts to allow the team to set up for the evening, reopening at 7pm for stand-up comedy.
At present, the main, ground-floor area is all that’s regularly in use; during this year’s festival the basement bar area will also be pressed into service as a secondary venue and there are plans to open it full-time.

“Eventually we’ll have it as a more independent bar, where people can come in and have a drink, but also use it as a downtime space away from the hustle and bustle of upstairs,” said Bleese.

In the meantime, the team is happy with how the venue is progressing.

“I turned up on a Saturday and couldn’t get a seat,” said Bleese. “It’s a bit ironic, but it’s not a problem I’d want to change.”