Licensee of the Year’s traditional venue has some trendy twists

Customers may not always be fully aware of it, but there’s no pub that gets to become an “institution” without some hard graft.

Over the last few years, The Allison Arms on Glasgow’s south side has become one such household name – and it’s not difficult to see why.

Driving the venue forward over the last four years is general manager Babs Steel, who was named SLTN Licensee of the Year for 2016, in association with Carlsberg UK.

Babs’ success may not have been a surprise to many who know the venue, but it wasn’t something she expected herself.

“I was really, really shocked because I’d been in for it (the SLTN licensee award) the year before; I got to the final three and I was, I just didn’t know,” said Babs.

“I was pretty stunned when my name was read out to be honest. I was really, really over the moon.”
Whilst very welcome, awards success hasn’t changed much at The Allison Arms.

“We’ve just been doing our usual stuff and it’s still going like a train,” said Babs.
“A Saturday night in particular, we normally had six staff on we now have seven. It’s pandemonium, I don’t know where they’re coming from; I don’t care either.”

Changing demographics in The Allison Arms’ local community can’t have hurt the pub’s trade, but with turnover doubling in the last four years it’s more than likely Babs has been a pretty big force behind the pub’s success.

And it should come as no surprise that Babs has her fair share of on-trade experience.
Starting out at the Boswell Hotel on Mansionhouse Road when she was a teenager, Babs said she “took an interest straight away” in all things on-trade, eager to learn everything there was to know.

From there, she moved on to The Fotheringay on Nithsdale Road (now The Bungo), where she held her first licence, before moving to The Allison Arms. 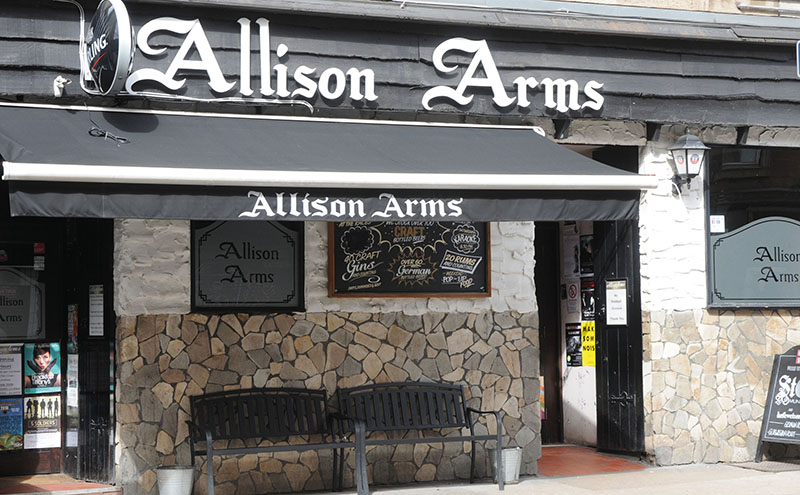 Less than six months after she joined the pub as a chargehand, Babs was off across the Clyde to sister venue Quarter Gill in Partick, taking on her first manager role in the process.

Only after 12 years at the Quarter Gill did Babs return to The Allison Arms, starting the four-year process that’s put the south side venue on the map as a traditional pub with a difference.

“It was just very traditional, it still kind of is but with a twist now,” said Babs. “We have all our gins and craft beers and whatnot.”

‘With a twist’ is right.
From the exterior, The Allison Arms still has the look of a traditional pub; inside, however, it’s stocked with a craft beer range of the breadth and quality to rival the trendiest London bar, and a gin range vast enough to outshine more than a few pricey cocktail bars.

The gin isn’t gathering dust either, according to Babs, who hasn’t just chosen some popular brands and left it at that.
“Now, because of all the gin we have it’s like a fruit and veg shop,” said Babs.

“There’s two trays up there with the stuff all ready to go with the correct garnishes for all the different things. It’s not just the gin getting slung in a tumbler and a thing of tonic.

“You just wouldn’t think that from a wee traditional looking pub.”
Buying in a big range of trendy products can help a venue, but isn’t enough to build the kind of reputation now enjoyed by The Allison Arms.

Babs reckons the secret is maintaining solid fundamentals while adapting to the changing on-trade landscape.
“Attention to detail is a huge thing – things like maintaining your beer lines, having a good pint, but still keeping on top of the trends,” said Babs.

“We’ve really gone with the gin thing. We’ve got about 70 gins just now and they’re not dust collectors, they do actually sell.

“Obviously we like keeping interesting beers and things coming in.
“They do change a lot; you won’t find the same stuff in there every time.”

All of this effort from The Allison Arms team has resulted in more recognition for the venue, in addition to the enviable increase in turnover, which Babs welcomes.

“Over the last few years the name of the pub [has become more well-known],” said Babs.
“Most people know it, whereas three, four years ago they wouldn’t really. It is nice to hear that when you’re out and about chatting to folk.

“A lot of the time it surprises me just how many people know it now. It’s nice to know that it’s well known.”