WHYTE & Mackay is ready to roar with a new partnership that will see it sponsor the British & Irish Lions’ 2017 rugby tour to New Zealand. 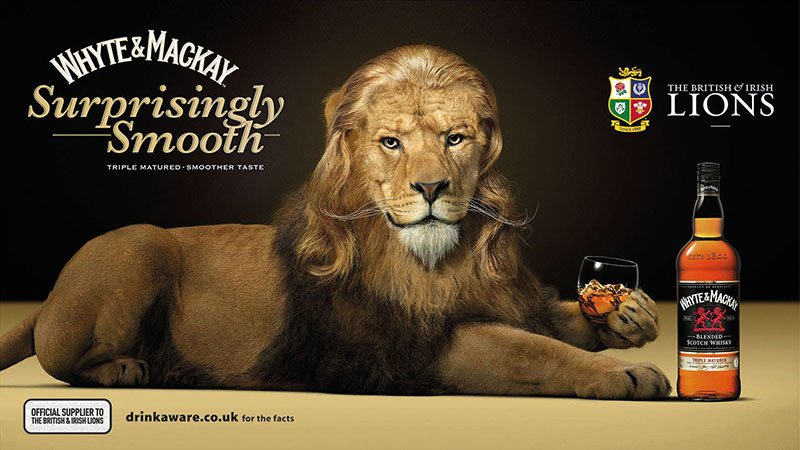 The deal, said to be the first of its kind for the blended Scotch whisky brand, will see Whyte & Mackay support the team during this summer’s tour, which kicks off on June 3 and runs until July 8.

A co-branded marketing campaign, running throughout the tour, will include on and off-trade support.
Chief amongst the sponsorship is the ‘Surprisingly Smooth’ ad campaign, which features ‘dapper’ lions.
Created by photographer and digital artist Tim Flach, the lions are said to be designed to “challenge perceptions [of] blended whisky and highlight Whyte & Mackay’s smoother, richer taste”.

The sponsorship will also include a raft of out of home advertising, as well as promotion over digital and social media.
Whyte & Mackay said the sponsorship is a natural fit. A symbol of a lion has featured on its branding for over 170 years, and it says it shares a similar ethos to the Lions rugby team – just as its top players are selected from Scotland, England, Ireland and Wales, Whyte & Mackay said its blending process brings together single malts from the Highland and Speyside regions of Scotland.

Bryan Donaghey, chief executive of Whyte & Mackay, said: “The double lion icon has been part of our brand since the beginning, and that’s just one parallel between the Whyte & Mackay brand and The British & Irish Lions.
“We are both brilliantly blended – while the Lions take the best rugby players and bring them together for great results, here at Whyte & Mackay, we combine the best single malt and grain whiskies to create our award-winning blended whisky.”