WHEN City of Glasgow College chef lecturer Gary Maclean returned to the classroom after Christmas, it was with a trophy in hand and to cheers from his students.
Gary has become a household name to millions across the UK after taking the title on BBC2 culinary hit MasterChef: The Professionals 2016, but he insists after that initial outburst of adulation from his students it’s been business as usual, in the classroom at least.
“The phone and email has been non-stop,” said Gary, who in addition to his lecturing role has been balancing media duties since he emerged victorious from a seven-week battle with 47 other chefs, which concluded on December 22.
With the sudden explosion of media interest in Gary, he might be seen as an overnight success – but that’s some distance from the truth.

A well-kent face to many in Scotland’s hospitality industry, Gary started his kitchen career at the age of 15 after his brother got him a job at the Forest Hills Hotel near Aberfoyle.
From there, Gary’s CV reads a bit like a who’s who of the last few decades in the Scottish industry.
After Aberfoyle, he took on a role at the Holiday Inn in Glasgow (now a Marriott) before going to work with Scottish celebrity chef Ferrier Richardson at October in Bearsden, opened in 1992, and then helping Richardson launch October Cafe in Princes Square.
Gary then had a stint working as executive chef for Glasgow museums the Burrell Collection and the Gallery of Modern Art as well as some time at the turn of the century in Ferrier Richardson’s award-winning Yes restaurant.
Kitchen work continued for Gary, but it moved into the realm of what he described as “empire building” with G1 Group.
Taking on the role of group executive chef in November 2001, Gary played a significant role in seeing the multiple operator expand from a handful of venues to the trade behemoth it is today.

Those who followed Gary’s MasterChef journey will have witnessed his passion for Scottish produce, so it should come as no surprise to learn he’s the man behind G1’s successful Bothy restaurants.
“The concept I came up with was Scottish food from my childhood, rather than Rabbie Burns’ childhood,” said Gary.
While Gary’s brand of Scottish cooking doesn’t ride on the coat tails of Sir Walter Scott and shortbread tins,
he did spend some time in Burns country in 2007, working with multiple operator Buzzworks.
A year’s consultancy work followed Gary’s time in Ayrshire before the chef found his way to his current home, taking on a full-time chef lecturer post at City of Glasgow College in 2010.
With a wealth of experience behind him and opportunities still opening up, Gary makes for a good advert to those considering a career as a chef, and he reckons the Scottish dining scene is in finer fettle than when he got going in the 1980s. 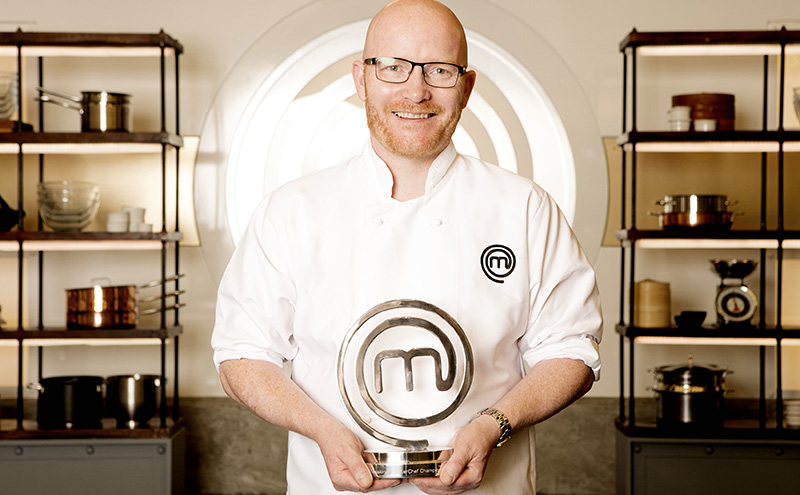 “When I started out there was only three restaurants [in Glasgow] I could work for in fine dining,” said Gary, adding that while ten years ago he reckons he could have named every fine dining chef in the city, “now I couldn’t even name all the fine dining restaurants”.
Gary reckons there has “always been demand” for good, qualified chefs, and recognises that there are venues out there for cooks of varying ability.
“I understand not every student will head off to London,” said Gary, but the lecturer believes there’s plenty opportunity for those willing to work.
“I think there’s always been a career in it,” said Gary.
“If you’re willing to work hard there’s amazing opportunities.”
Many of Gary’s students have shown their willingness to work, taking on kitchen roles in addition to their studies –something Gary encourages.

“We’ve got 600 [students] coming through every year and we’ve got great relationships [with industry],” said Gary, adding that he’d always welcome more restaurateurs to get in touch.
Relationships in any industry are crucial, and it’s in this regard that Gary believes the Scottish restaurant business really shines. “I think our industry, what we get in Scotland, is really unique,” said Gary.
“Everyone knows everyone.”

For those looking to carve out a place in that unique environment, Gary offered a few tips.
The MasterChef winner is undoubtedly a fan of competitions, both as something of a CV builder and as an opportunity to learn new skills.
And learning is key in Gary’s view. “I’ve never stopped listening,” he said. “I learn all the time, including from students.”

With this in mind Gary highlighted two key points for chefs starting their career.
Point one is to gain qualifications, making use of culinary courses available to those entering the industry.
Gary’s second bit of advice: “work in the best place you can” and “don’t chase money”.
The father of five added that the money will come later, “when you need it”.