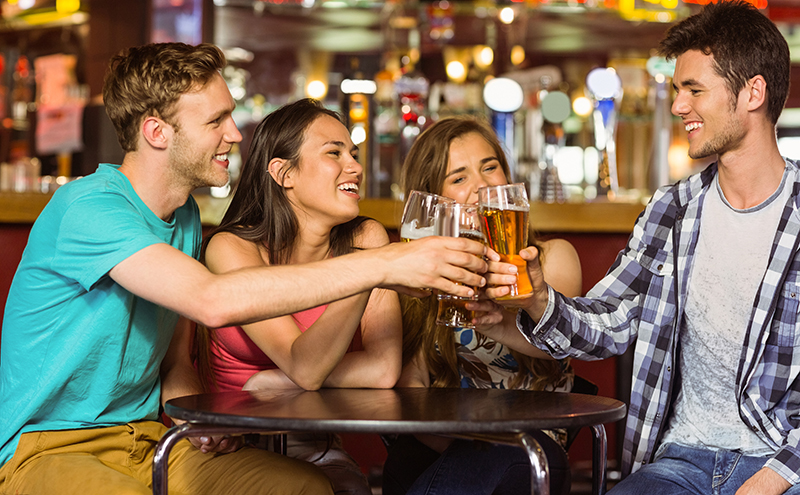 LOW and no-alcohol drinks have become more prominent since the drink drive limit in Scotland was lowered in December 2014.
That change in legislation, coupled with many consumers opting to moderate their alcohol consumption, means the category can offer a real opportunity for licensees, and brewers have weighed in with advice on the best ways to capitalise.
Ben Jordan of AB InBev, the firm behind Beck’s Blue, said that in a world where “health is king” for customers, the firm has seen “a growth in consumers looking to moderate their drinking”.
Jordan reckons there has been a stigma surrounding alcohol-free beer in the past, “with consumers defining it by what it is not, rather than what it is”, but this may be changing.
“The reality is alcohol-free beer is brewed and made with 100% natural ingredients and is a refreshing alternative to other alcohol-free beverages on offer in pubs and bars,” said Jordan.
“Some internal research we did in 2016 found that consumption of alcohol-free options is seen as most appropriate by consumers in settings when other people are drinking – like pubs and bars or parties – so the category is a great opportunity for the on-trade environment, but they need to ensure they communicate their offering.”
To make the most of this growing opportunity, Genna Burchell of Charles Wells, the firm behind Erdinger Alkohol Frei, reckons operators must focus on getting quality product in the chiller.
“Go with what offers the best taste,” said Burchell.

“The biggest criticism of zero or low-alcohol brands is that they just don’t match up to their higher-ABV cousins.
“Look for a brand that has proven itself with independent taste tests and has a proven track record for customer satisfaction.”
Burchell advised operators to make sure they try the alcohol-free beers themselves before purchasing.
“At the very least, this will help you to get to know its tasting notes so you can talk to your customers about its flavour and also back up the statistics from any independent taste tests that have been carried out,” she said.
“At the end of the day, a lower-ABV beer is still a beer and you need to treat it as such.”
Treating alcohol-free beers with the same respect as their higher gravity counterparts is key, according to Burchell, who suggested operators get staff engaged with what they’ll be selling.
“Organise staff tastings to learn the ingredients and how it’s brewed,” she said.
“If you serve food then recommend your low or zero-alcohol beers as part of your food and beer matching list, create low-alcohol special offers, and let customers ‘try before they buy’.
“This will help to remove any uncertainty about the quality and satisfaction of those low or zero-alcohol beers, demystifying them and helping them to become a welcome, but alternative, addition to your range at any time of year.”
Education was also described as vital by Sean Durkan, head of marketing for Bavaria UK.
Durkan said education is “crucial to establishing alcohol-free drinks as a genuine category rather than an afterthought in the on-trade”.
“By prioritising staff training, outlets can make sure their teams understand the heritage and story behind no and low-alcohol brands, so they encourage customers to branch out and discover something new,” he said.
Visibility is also essential to driving sales, according to Durkan, who suggested operators advertise alcohol-free beer in their outlet in the same fashion as any other product.
“What’s more, premises should think about the visibility of brands on the
bar – branded glassware, POS, in addition to increased prominence on drinks menus, will help boost the profile of low and no-alcohol choices,” he said.
“This will encourage consumers to try something different rather than their ‘go to’ soft drink choice.”