SITTING with Gary Watkins, who operates The Crown Inn with his wife Lorraine and their general manager Matthew McKean, it’s not long before they’re approached by various regulars, all eager to comment on their recently-refurbished pub, situated in Biggar.
According to Gary, it’s the greatest relief that the refit has been so well received.
“I had sleepless nights about people worrying about us changing the ambience of the place and The Crown [still] being The Crown,” Gary told SLTN.
When Gary and Lorraine made the decision to refurbish the Greene King tenanted pub, it was carefully thought out.
General manager Matthew, who has been with the business for five years, said the revamp was two years in the making.
Working with Alan Baxter of DBP Architects, one of Greene King’s appointed design firms, the team was able to fulfil their vision and make significant changes – all the while retaining certain parts of the pub’s image.
“They worked very closely with Gary and Lorraine during the design process,” said Matthew.
“So every aspect of the pub has been bespoke designed for us.
“They (the Watkins) know the pub very well – they’ve had it for 12 years.”
The refurbishment, which was co-funded by the Watkins and Greene King, kicked off on October 31 last year.
Work was carried out by shop fitting firm H Peel & Sons, which was set an ambitious turnaround of four and a half weeks.
In this time “major structural work” was carried out on the pub.
Despite the size of the project, the refit was completed on time, and the pub reopened on December 2.
Chief among the changes inside was the demolition of two supporting walls near the front of the pub, opening up the space and connecting each area; this had been a previous weakness of The Crown, according to Matthew.

They know the pub very well – they’ve had it for 12 years.

Describing the previous layout of the premises, he said that customers would often look in, see the immediate area packed with people and then leave, not realising that the large seating area at the back existed.
Now that the interior has been opened up and extended – increasing capacity to 100 covers, as well as allowing for a larger kitchen and new toilets – people “naturally gravitate to our new area”, according to Matthew.
Despite the structural changes, the Watkins wanted the feel of the property to remain true to its heritage.
Exposed stone walls are adorned with black and white pictures and an eclectic array of antique mirrors. Other features of the new design include deep red tartan carpet and contrasting oak flooring; a new log burner in the fireplace; and a new bar, which was deliberately designed to look similar to the one it replaced.
But the main difference is the addition of more beer lines, increasing capacity from three hand pulls to six.
It has been something of a win-win for Gary and Lorraine, who picked up CAMRA’s Lanarkshire Pub of the Year for 2016, as the new lines have allowed them to explore and stock a broader range of ales. 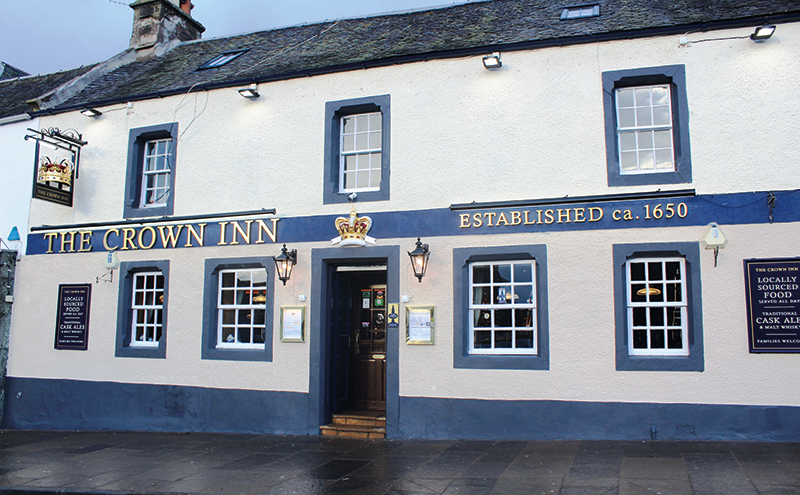 Gary admitted it was “a surprise” to win the accolade, as they had no idea they’d been considered for the award.
However, ale is certainly a focus for the pub.
Supplied by Greene King, the range of ales changes weekly, with real ale the biggest seller on draught.
On the spirits side, gin is the pub’s best selling spirit; it now stocks a range of 37 different gins, supplied through different arms of wholesaler Booker Group (Makro and Classic Drinks). The firm also supplies The Crown Inn with other spirits, as well as wines and soft drinks.
Another change at The Crown is the introduction of new premium products such as beer brands Birra Moretti and Kozel and a wider selection of whiskies.
Food has been another area of expansion for the venue, with Matthew remarking that, due to changes in Scottish licensing and alcohol laws, “our ability to trade and keep a very good profit is dependent on our ability to sell food”.
And the team does its utmost to stay local where possible, working with Glasgow-based Smiths Gourmet Butchers (meat), Thornhill-based Nith Valley (free-range eggs) and Taylor’s of Biggar (desserts).
Not resting on their laurels, Gary and Lorraine aim to
open a 14-bedroom B&B across from the pub which, subject to planning permission, will link up with The Crown later this year.
In terms of the pub itself, Matthew said the aim is to “keep that level of trade, level of service and level of quality that many people expect when they come here”.