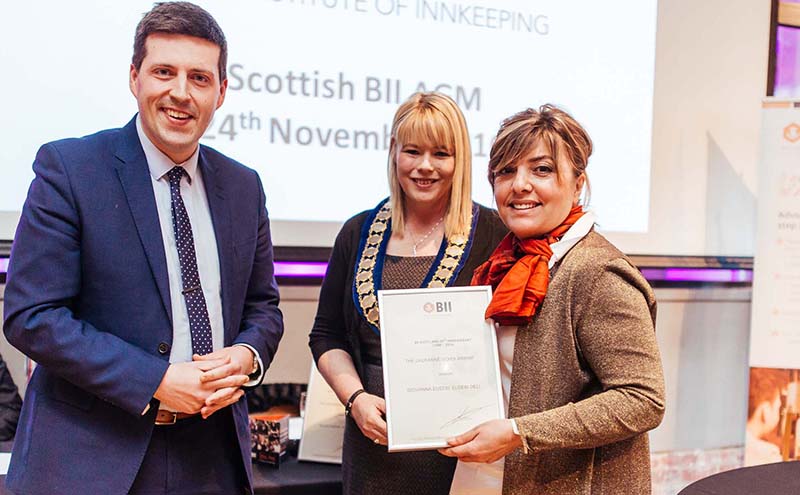 PROMOTING the licensed trade as a rewarding, long-term career choice will be the top priority for the incoming chair of the British Institute of Innkeeping (BII) Scotland.
Joanne Graham took up the mantle at the trade group’s recent AGM in Glasgow, succeeding previous chair Stephen McGowan.
Graham, who was previously deputy chair of the organisation, said one of the long-term goals of BII Scotland is to help change perceptions of careers in the licensed trade and wider hospitality industries.
“The perception of a lot of people with regards to retail, licensed hospitality, working in a coffee shop or whatever, is that you’re there as a part-time job or  it’s something to keep you going until you get a better job,” said Graham.
“I have to say, for both retail and the licensed trade, I have had no better jobs, and I can see no better jobs, and I don’t want young people to think of it as a stop-gap.
“This has to be a career option.
“So one of the things we as a council are going to be doing is try, in Scotland, to help the employability side and influence the influencers of young people.”
Stepping down after four years as chair, McGowan said he has been “privileged to have worked with a great number of exceptional people”.
“The BII is all about volunteers,” said McGowan. “BII Scotland is a small group of volunteers, that come and help and give us their spare time. And that’s for the love of this industry.
“That’s a statement if ever I heard one, and I’m very grateful to all of the council members who have supported my position as chair over the last four years.”
In addition to the former and incoming chairs the AGM, which took place in the function room of West Brewery, also heard from Scottish employability and training minister, Jamie Hepburn, as well as two hospitality professionals who recently received scholarships backed by BII Scotland.
Giovanna Eusebi, of Eusebi Deli in Glasgow, attended a three-day course in Lausanne, Switzerland, while Kelsey Wood, of Edinburgh group Boda Bars, will shortly undertake a three-day placement at Gleneagles.