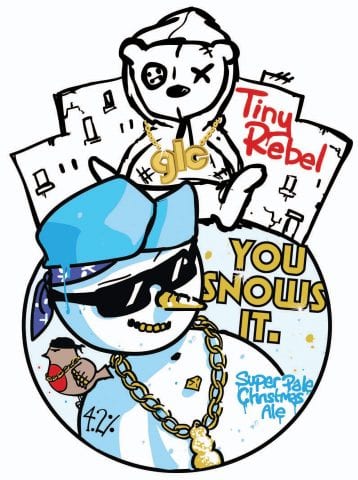 You Snows It is described as a 4.2% ABV ‘super premium Christmas ale’ which has been produced using British and New Zealand hops as well as extra pale malts to make the beer as light as possible.
The release of the beer has been accompanied by a music video from Goldie Lookin’ Chain, which can be viewed on the group’s YouTube channel.
“Christmas isn’t Christmas without cheesy songs and pun-based seasonal beers, so we invited the guys from GLC down to help create both,” said Tiny Rebel co-founder Gazz Williams.
“Eggsy, Rhys and Adam came down to the brewery and our head brewer Sarah showed them the ropes. The guys helped with all aspects of brewing, but left most of the decision making to us.
“Likewise, we left most of the song writing to the guys from GLC, ensuring we all played to our strengths.”
This is the second time the brewery has produced a beer with the Welsh rap group, after producing Goldie Lookin’ Ale with the group in 2013.
And it is unlikely to be the last collaboration with musicians, according to co-founder Brad Cummings.
He said: “From January, we are up-and-running in our new brewery site.
“The expanded capacity and capability will mean we can get our limited-edition brews to more beer lovers and hopefully tap into some more Welsh musical talent with other collaborations.”