CHRISTMAS might traditionally be associated with Champagne and dark spirits, but licensees who neglect their beer offer this December will be missing a trick. 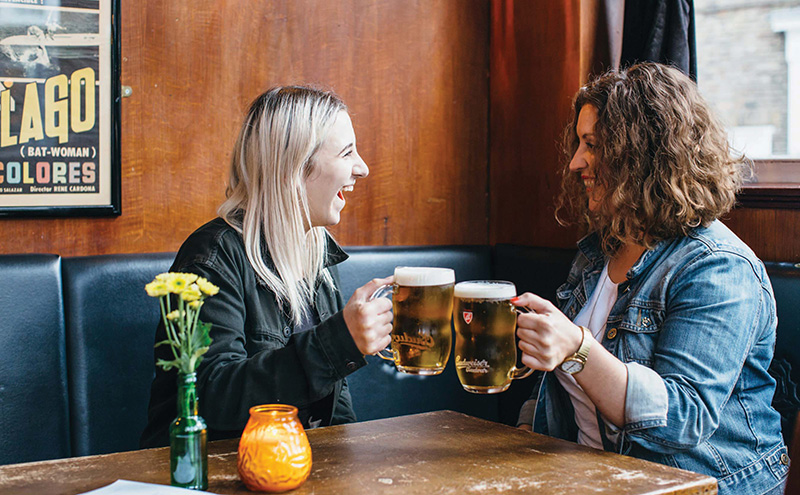 Brewers have stressed the important role beer will play throughout the festive season as customers visit the on-trade, and encouraged operators to make sure they factor beer into their Christmas plans.
The festive season is an important time of year for drinks sales overall, but the volumes of beer sold at the end of the year are significant, according to Simon George, managing director of Budvar UK.
“According to the latest BBPA data, the November to December [period] accounts for 20% of annual beer volumes, representing 21.4% of annual sales in the off-trade and 18.1% in the on-trade,” said George.
He added that, with consumers in a celebratory mood over the festive season, they are often open to trying new and different beers when in the on-trade.
He recommended licensees consider introducing a range of cask ales in time for the festive season.
“We see two occasions in particular increasing around the festive season; those involving drinks with food and those that are wet-led with friends – so it’s important to have a broad range around this time,” he said.

Consumers are more likely to try something different at this time of year.

“A good cask ale range is key; with one good local ale – usually at a lower ABV, and a range of other styles and ABVs – including porters and new world hopped ales.
“A similar kind of mindset when thinking about ranging lagers should be adopted.”
World beer is another category worth considering, according to Claire Arnott, head of UK customer marketing at Tennent’s.
She said: “Over the busy Christmas period, consumers are in celebratory and festive moods, meaning they are more likely to try something new.
“Stocking a world beer is a good way of giving drinkers something different or of a more premium price.”
Arguably more important than the particular sub-category of beer is the ability to provide customers with something they haven’t tried before.
Andrew Turner, category and trade marketing director, on-trade, at Heineken, said it’s important a beer range is capable of capturing the customer’s interest.
“With such a broad audience of people visiting pubs these days, it’s important to stock a range of different styles at different price points to ensure you’re catering for all tastes and preferences,” said Turner.
“Consumers are more likely to be up for trying something new at this time of year so your range needs to peak their interest, allowing them to trade-up and discover something new that they wouldn’t normally choose.”
And as many Christmas events will involve food, it can be wise to stock beers that complement an outlet’s food menu.
“Drinking beer throughout the dining experience is increasingly popular so we would recommend highlighting beers that work well with roasts and other Christmas food on the menu to help customers make a choice that complements their food,” said Turner.
Whichever beers licensees opt for, it will be important they take the time to train their staff on the products they are selling.

November and December account for 20% of total beer volumes.

Arnott at Tennent’s said knowledgeable bar staff “have the ability to make informed recommendations and give outlets the opportunity to up-sell and introduce new products to their customers”.
“Data from CGA states that 80% of consumers are influenced by bartender recommendations,” said Arnott.
George, at Budvar UK, agreed.
Quoting figures from the recent Cask Ale report, he said that 92% of consumers want to know more about beer styles, with 60% saying pubs don’t currently offer enough information on the beer they are selling.
“We believe this is the case for premium lager and craft drinkers too, so along with using the correct glassware and training staff, we recommend either full beer lists or short text around tap handles and point of purchase to indicate the provenance, style and taste of beers,” said George.