ASK any number of chefs and they’ll tell you that the Glasgow dining scene has greatly improved over the last few years – and Peter McKenna of The Gannet is no exception.
The chef proprietor reckons things have advanced “a heck of a lot” in the city.
His own restaurant, which he launched with fellow chef proprietor Ivan Stein in 2013 in the city’s vibrant Finnieston area, has quickly established itself in Glasgow’s burgeoning eating out scene.
And, last November, The Gannet was named SLTN Casual Dining Restaurant of the Year for 2015, in association with Strathmore.

While welcoming the recognition, McKenna reckons awards also make recruiting quality staff that little bit easier.
“The important thing about getting awards is it attracts the right type of employee, someone who wants to push themselves and someone who wants to do better,” he told SLTN.
“That’s brilliant because you’re only as good as the people that are working with you, and I say working with because I’m down there [in the kitchen] doing butchery and making gnocchi and prepping fish, very hands-on.”
Hands-on seems like an accurate description of McKenna and Stein’s approach at The Gannet, which is the pair’s first foray into owning a business.
Meeting while working at Michael Caines’ restaurant at the ABode Hotel on Bath Street, which traded from 2006 to 2011, the two chefs decided to set out on their own in the summer of 2012, hammering out the concept of what would become The Gannet on a trip to the Hebrides with silent partner Pete Reid.

Opening on October 1, 2013 with a kitchen team of four, including McKenna and Stein,  the restaurant has been built up by the pair through hard graft, putting in the hours to build the quality that’s led to success – and the ability to reinvest.
Navigating some choppy waters along the way, McKenna reckons The Gannet has succeeded, at least in part, because of an excellent team.
“Obviously the first year and a half was a bit of a roller coaster,” he said.
“Myself and  Ivan, it was our first venture.
“We had a lot of staff fluctuation in the first year in the kitchen and on the floor but we had a core team and we added a restaurant manager, Kevin Dow, to that just after we were a year old and he’s been pivotal to the continuing success.
“He really got quite a solid foundation in place.”
In addition to McKenna, Stein and Dow, The Gannet’s core team now includes mixologist and bar manager Callum Dawson, who leads cocktail and wine training for the front of house team.
For those in the kitchen, education comes from McKenna and Stein. 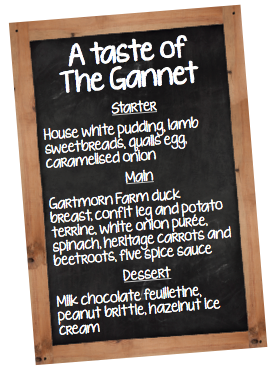 In the years before working at ABode, McKenna built up an eclectic CV of fine dining experience from across the globe.
The Irish chef’s kitchen experience includes stints at Chez Bruce in London, chef Liam Tomlin’s Banc Restaurant in Sydney, Australia, and personal chef jobs for a Saudi Arabian prince and a Russian oligarch – Oleg Deripaska.
Stein’s road to owning his first restaurant was similarly unconventional. With an academic background at institutions such as the London School of Economics and Oxford University, the chef previously worked as a civil servant in London while pitching in for free at some of the city’s top restaurants during his time off, fuelled by his passion for food.
All that experience is now passed on to The Gannet team who are given regular training sessions by the business
owners.
“[In] the back of house we do all our own butchery so we get two whole lambs in every week and I get the guys down there once they’ve got to grips with their own section and show them how to butcher [and] how to gut fish,” said McKenna.
Putting ingredients centre stage is at the heart of The Gannet’s offer, which is rooted in the two chef proprietors’ shared love of produce.
“We’re both quite focused on product rather than gimmickry: foams and powders and that carry-on,” said McKenna.
As a result, the local produce-driven seasonal menu at The Gannet offers a selection of Scottish flavours, cooked in what McKenna described as a modern and progressive style.
“We use a mixture of new techniques and old techniques,” he said.
“So we have water baths and combi-ovens, but we also pan-fry and poach.”
It’s an offer that McKenna reckons Glaswegians have warmed to.
“When you first start off people don’t know what to expect so people are coming here with no knowledge of what we’re about,” he said.

“We always knew there would be a customer base into this but it’s kind of  nerve racking to begin with.”
With dishes being rotated and revised on a regular basis at The Gannet, the menu doesn’t lend itself to being easily pinned down.
Dishes such as crisp rabbit confit with seared loin, carrot, radish and piccalilli emulsion; Borders lamb served with an aubergine puree and cumin sauce; and a salted caramel fondant, which McKenna said is such a firm favourite it has managed to earn a rare permanent spot on the menu, give an idea of what’s on offer, but the offer continues to evolve.
“The menu is completely different now from when we opened the first year,” said McKenna.
“Looking back at the first six months of dishes we were doing, they were grand dishes and popular but everything’s a bit more complex now.”
It’s not just the menu that’s changing either, as The Gannet kitchen is set for a refurb in January 2017, comprising an overhaul of the whole structure, a new canopy system and the introduction of induction cookers across the board.
“We’re going electric just like Bob Dylan back in the day,” said McKenna.