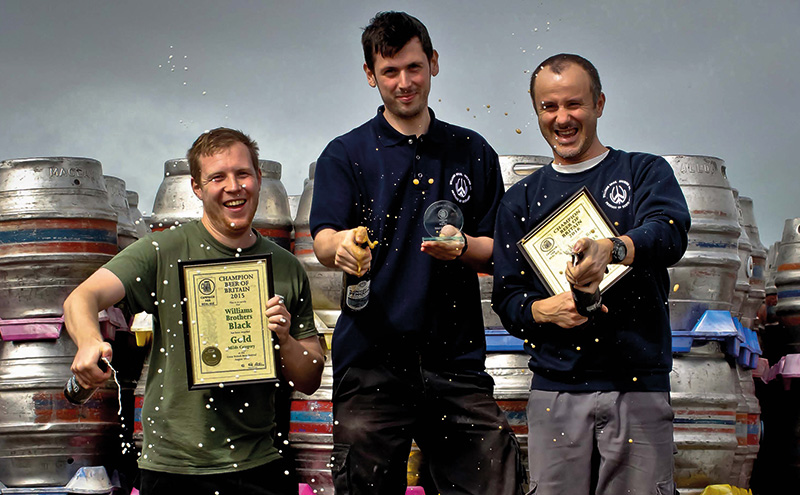 Alloa-based craft brewery Williams Bros is the only Scottish brewer to have won a gold award at this year’s Champion Beer of Britain awards.
The company’s Black beer won the Champion Mild of Britain category at the event, which is judged by the Campaign for Real Ale (CAMRA) and takes place every year as part of the Great British Beer Festival.
It is the second year in a row that the Williams beer has taken the gold award in the category.
“We are absolutely delighted for Black to be crowned Champion Mild of Britain at the GBBF for the second year in a row,” said Chris Williams of Williams Bros.

It’s a testament to our dedicated brewers and staff and all their hard work.

“Williams Bros started out as a cask ale producer in 1992 so it’s fantastic to still be winning awards for our beer nearly 25 years later.
“It’s a testament to our dedicated brewers and staff and all their hard work. It’s great to be able to bring back our gold award and see them celebrate the win.”
Williams Black is described as having flavours of malt and caramel with a dried fruit hoppiness.
The Champion Beer of Britain winners were announced after almost a year of local tasting panels and regional heats.
The overall title of Supreme Champion Beer of Britain was awarded to Vanilla Stout from Berkshire brewery Binghams.
“This year all the judges commented on how high quality all the beers were in the final stages of the competition and what a wide range of styles and beers they had to try and choose between,” said CAMRA national director Nik Antona.