Major campaign launches ahead of the 2016 Olympics

HEINEKEN has launched a new, multi-million pound advertising campaign for Strongbow ahead of the 2016 Olympics in Rio. 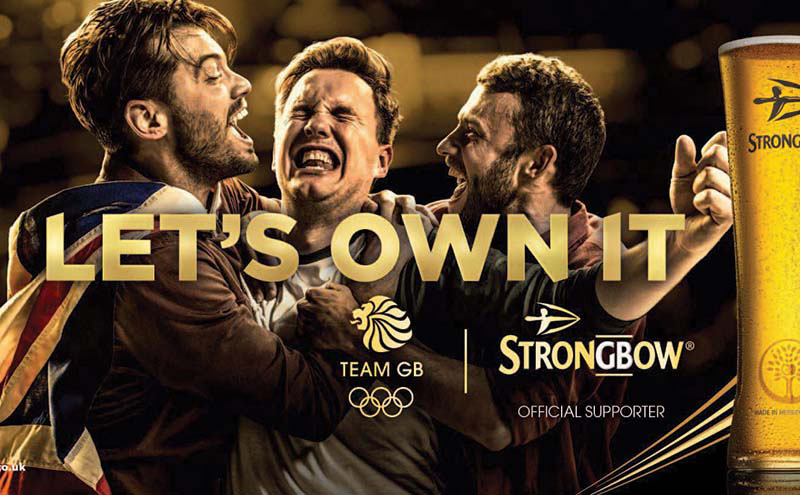 Looking to “rally the nation behind Team GB”, the wide-ranging activity is running across television, radio, digital and social media and video on-demand as well as appearing on out-of-home poster sites.
The out-of-home advertising is described by Heineken as “featuring the most captivating elements of the games; unity, tension and the thrill of being lost in the moment”.
The 30-second television advert, which began airing last month, will broadcast until the end of August.
The new campaign forms part of the cider brand’s exclusive sponsorship of Team GB, with the message ‘Let’s own it’ featuring throughout.
The activity is the first campaign to run across all of the cider brand’s variants – Strongbow Original, Strongbow Dark Fruit and Strongbow Cloudy Apple.
Cindy Tervoort, marketing director at Heineken, said: “We want to bring back the excitement we all felt during London 2012 and rally the nation to get behind Team GB.
“The pride and enthusiasm we experienced as a nation in 2012 was incredibly special, and we anticipate that our campaign will help the nation feel it once again.”
The Rio 2016 Olympic Games begins tomorrow (August 5) and runs until August 21. More than 10,500 athletes from 200 countries will compete in the Games.