A year after joining Tennent’s, managing director is bullish about trade 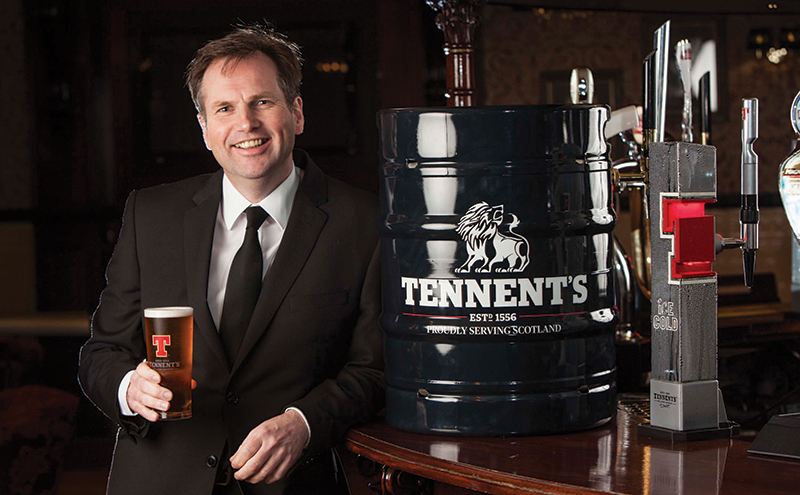 THE strength of the Tennent’s name isn’t lost on managing director Alastair Campbell.
When he joined the business last June, Tennent’s was in the process of integrating wholesaler Wallaces Express, which it had acquired in 2014. Prior to his arrival the joint entity was briefly branded as WallacesTCB.
It was Campbell, who worked for two decades in the travel industry prior to joining the C&C-owned brewer and wholesaler, who decided to drop the Wallaces name in favour of rebranding the entire business as Tennent’s.
Speaking to SLTN, Campbell said it wasn’t a tough decision to make.
“When I came in I spent a lot of time going out and meeting customers,” said Campbell.
“And it was a constant question: why are you called WallacesTCB? Why don’t you change your name back?
“We didn’t formalise changing our name till the beginning of February, but the decision to do that was made substantially in advance.
“When you’ve got not just the strength of the brand, but the heritage of Tennent’s as a brand, it’s just – in my mind – an obvious thing.”
While, on the surface, the travel and brewing/wholesaling industries may seem worlds apart, Campbell wasn’t entering Tennent’s as a complete outsider to the licensed trade.
While he admitted embarking on a “learning curve” when he first joined the company, Campbell’s previous travel industry career had included overseeing a couple of Scottish pubs, so he had a taste of the industry as a customer.
“At least I had some frame of reference about it,” he said.
“The learning curve with any sector is really learning the network – who’s who – and to some extent the jargon.”
With the wholesale and brewing sides of the business integrated, Campbell’s main focus was on customer service.
Staff in the business were trained (or retrained) extensively, using a combination of the company’s own Tennent’s Training Academy facility as well as external training firms, and the new Tennent’s Direct online ordering service launched to give customers more choice in how they place their orders.
“Too much sales training is about ‘this is what you want to sell to the customer, this is how you sell it, go and sell it,’” said Campbell.
“The training we’ve been doing is all customer-driven.
“It’s all about consultative selling, it’s about understanding a customer’s business.
“It meshes with the underlying ethos of the business, which is an enduring relationship with the customer.”
The Tennent’s product range has also been a focus.
In recent years the company has introduced a raft of beers to the trade, including Caledonia Best, Belgian lager Heverlee and Italian beer Menabrea, as well as investing in craft brewery Drygate in a joint venture with Williams Brothers.
Late last month Tennent’s officially launched Gluten Free T, and in the coming weeks will be offering customers American beer Pabst Blue Ribbon.
In total, the wholesale side of the business sells around 2500 products.
Campbell said the expanding product range helps the company cater to tastes that are much more fragmented than in the past.
“Undoubtedly, in every consumer category that exists, choice is greater than it has ever been,” he said.
“Consumers want greater choice.
“We view it as an opportunity. You’ve got consumers out there who are trialing different stuff.
“If they don’t like it they’ll move onto something else and try that.
“The challenge behind the opportunity is making sure your portfolio of products meets their demand and you give them the choice and products they’re looking for.”
Campbell is confident the approach is working, with recent sales figures showing volume  increases for Menabrea and Heverlee as well as flagship brand Tennent’s Lager.
“A brand’s only about the customers,” said Campbell.
“Our customers love the brand and our job is to ensure they keep loving the brand. That’s really it in a nutshell.”