Quality and fun continue to underpin Edinburgh business after 12 years

Fun and quality beer were the two founding principles of Stewart Brewing when the company launched twelve years ago. 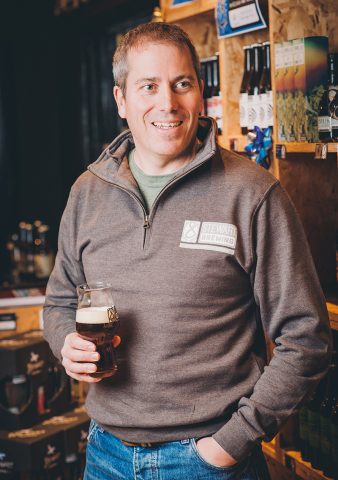 The Edinburgh craft brewery, founded by husband and wife team Steve and Jo Stewart, built on Steve’s expertise as a brewer for Bass.
But it was a trip to the United States in the late ’90s that provided the real inspiration for the business.
There, Steve would see first-hand what the new wave of American craft brewers were creating.
“I’d been across to the States, seen what the guys were doing over there, and thought ‘wow, they’re doing these fantastic beers and we’re doing these old, boring beers’,” Steve told SLTN.
“So I wanted to come back and start a brewery.”
Established in 2004, Stewart launched a core range of cask ales that included Edinburgh Gold, Pentland IPA and Stewart’s 80/-.
As demand grew, the firm expanded into different formats – bottles first and then kegs.
In 2009, with capacity at the original brewery limiting the company’s expansion, a brownfield site was acquired and plans drawn up for a new, larger facility, which opened its doors in 2012.
The new facility kick-started a period of innovation that resulted in a raft of new Stewart Brewing beers, which included the firm’s growing Hop Series – an expanding range of craft beers that includes Radical Road (a triple-hopped pale ale), Ka Pai (a ‘South Pacific IPA’, containing only hops from the South Pacific region) and Cascadian East (an east coast American pale ale).
The brewery’s Elysium range is a selection of whisky cask-aged imperial stouts, while canned beers include Belgian-style IPA First World Problems.
Stewart has also created beers in conjunction with other brewers: Pelican Grain Train, a bramble wheat beer created in association with Fallen Brewing in Stirlingshire; and Margarita Gose, a sour beer created with Lake District brewer Hawkshead.
These projects haven’t just been about creativity for its own sake, though.
Steve insisted that the public is now much more willing to try new beers.
“There’s definitely more awareness [of beer styles],” he said.
“And knowledge comes with awareness. While people have favourite drinks in their repertoire, they’re more willing to experiment now and try to get new flavours and new characters.
“It’s not just the brewers that are continually developing beers. Hop merchants are continually developing their hops, and all the time there’s this huge mass of innovation and evolution.”
The level of innovation at Stewart has been made possible by the launch of the brewery’s Craft Beer Kitchen – a 100-litre brewkit that allows the team to experiment with smaller batches of beer.
The facility has also added another string to the Stewart Brewing bow, allowing members of the public and the licensed trade to come in and brew their own beers.
“What’s really popular now is we get the whole pub team up to the brewery,” said Steve.
“We can host a meeting for them here, get them to brew their own beer.
“Really it’s about immersing them in what goes into brewing great beer.
“If they come up here for an experience, to run the Craft Beer Kitchen for a day and make their own beer, then they can sell this in the bar, they’ll be much more passionate about it, and they will have understood a lot more about what it is to make the beer – how important some of the ingredients are.
“That kind of thing is pretty helpful for developing the category in the on-trade.”
In addition to growing its beer range and customer base, Stewart has also long been involved in helping to foster new talent in the brewing industry.
The annual Natural Selection Project sees brewing students from Heriot Watt University working with the Stewart Brewing team to brew and launch their own beer.
“It’s nice to get your foot in the industry and understand what’s happening in the brewing world,” said Steve.
“And if we can offer other people a leg-up by giving them some practical experience it’s a really nice thing to give back.”
From the steady creation of new beers to the recent hosting of its first beer festival, Stewart doesn’t seem to be resting on its laurels.
But Steve insisted the core values of fun and quality are still at the heart of the company.
“To us, brewing beer is about having a lot of passion for what you do, making sure you’re trying to do the best beer in every circumstance, and really enjoying the variety and difference there is between different beer styles,” he said.
“So we’ve never pigeonholed or categorised ourselves as brewing this or that type of beer. Because we have a team that loves brewing different styles of beer.
“As long as it’s fun, why not do it?”