Riva Restaurants adds a touch of glamour to Kilmarnock with latest bar and restaurant.

Stepping into Bar Luca onto imported Italian mosaic, a cherry wood cabinet dominates the entrance showcasing 16 selected wines, each representing a different region of Italy; it sets the tone for the attention to detail paid to this opulent redesign. 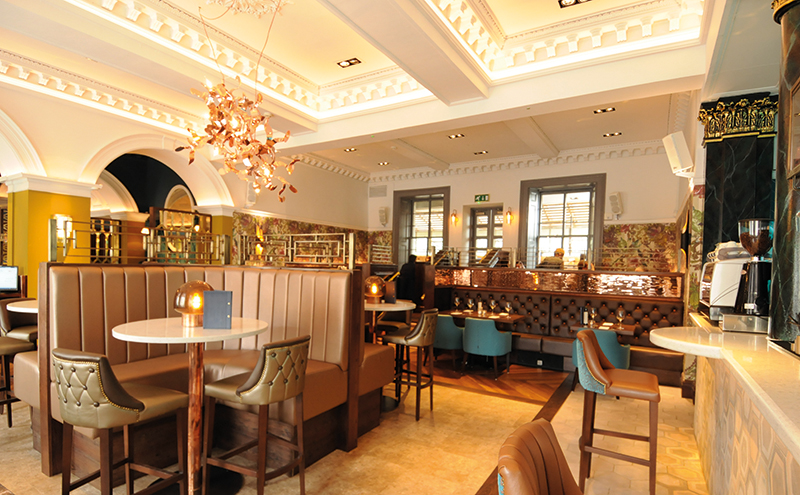 Having taken over Kilmarnock town centre bar and restaurant The Riverbank in May of last year, and running it in a similar vein for six months, Bar Luca is the latest addition to the Riva Restaurants portfolio, and reopened last month following an extensive renovation.
The large building, thought to be around 150 years old, was stripped back to the bare brick as owner Peter Di Ciacca got to work with Brian Shields of BSD Design Associates on a design concept for the venue.
Key to the redesign was accentuating the property’s original features – namely its ornate cornicing, sculpted pillars and grand archways.
Rory Watson, operations manager for the Riva Restaurants group, explained that highlighting the building’s original features was paramount.
“It’s a lovely building from the outside and I think it’s just doing that justice and making the most of the internal features,” he said.
Having worked closely with Brian on other projects (the Riva portfolio includes Nonna’s Kitchen, Riva, Camphill Vaults and two Rosso venues) the pair sat down and went through the different options for Bar Luca, with various discussions held on which elements to move forward with.
One key element of the redesign was dividing up the space in the 180-capacity venue, and ensuring each area had its own identity.
“It was very open, there was no defined spaces,” explained Rory.
“That was one of the things with the refurb – define the spaces to say that’s for dining, this is for drinks, where as previously everybody went everywhere.
“Basically, because we were breaking up the areas it was about giving each space features.
“We just felt every space we wanted to put people in they wouldn’t be thinking ‘this is a bit of a rubbish table’; it’s about having nice features throughout.”
Walking around the refurbished venue, each area has its own look – a deliberate part of the design, according to Rory.
And from the gold and brass-plated metalwork and plush blue velvet bench seating to the high marble-topped tables and new lighting, there’s no shortage of elements which are intended to add “real impact” to the design.
“It was a case of light fittings and features that give a design perspective,” according to Rory.
Sunken lights were installed as well as colour changing backlights behind the newly fitted bar.
But the new lighting is not just a design feature, it’s practical too as it “gives that mix of use throughout the day”, said Rory, in a venue which operates from 9.30am until late seven days a week.
“From an operational point of view it’s great, the lights are great as well because it allows you to dim to various levels,” he said.
“And at the weekend and later on it allows you to completely change the venue and make it into a late night bar.”
Being able to create different atmospheres was crucial, as Rory pointed out that the bar trade is “very very important” to the town centre outlet. 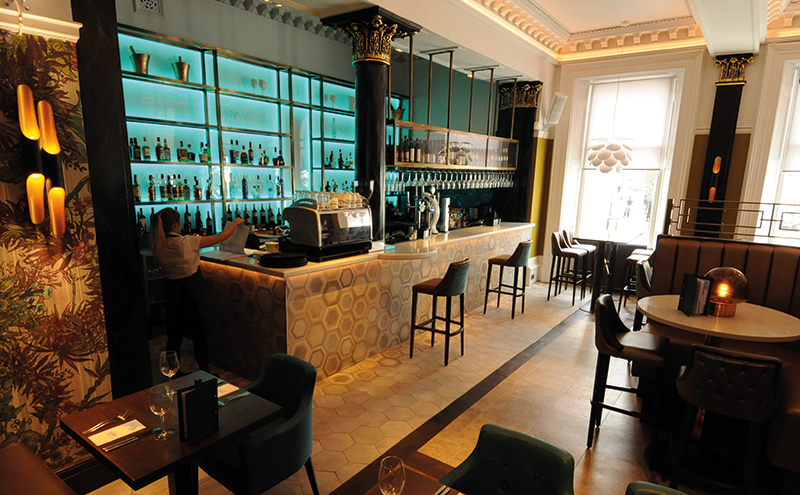 As a result, a new bar and designated bar area was another key part of the refit. And whilst there have been many changes, because cocktails were always “really big with The Riverbank”, they are still very much a feature at Bar Luca, whose main suppliers include Tennent’s, Inverarity Morton and Brakes.
“The amount of cocktails we’re selling just now, it’s crazy,” commented Rory, adding that cocktails are so far out-selling wine in the venue.
But whilst some aspects of The Riverbank have continued in Bar Luca, most were totally overhauled, including the food offer.
“It’s the Italian element, it’s very much throughout the whole menu,” said Rory.
“We’ve got pastas, a pizza oven downstairs, but we also do have steak, chicken and fish dishes as well so it’s not like you just have to come and have pasta and pizza.”
Claire Freckleton, marketing and business manager for the Riva Restaurants group, added: “It’s traditional Italian cooking with a modern twist.”
One of the key features of the new menu is that everything is freshly prepared – a baker works on-site providing freshly-made breads and homemade desserts; the outlet also offers gluten-free and dairy-free
menus.
And, despite pressure to retain some Riverbank favourites, Rory said it was time to ring the changes.
“One of the things we’ve thankfully got away from was the chicken crêpe that The Riverbank used to do – people went mad for it,” explained Rory, adding that customers were contacting the venue about whether the dish would remain on the menu. 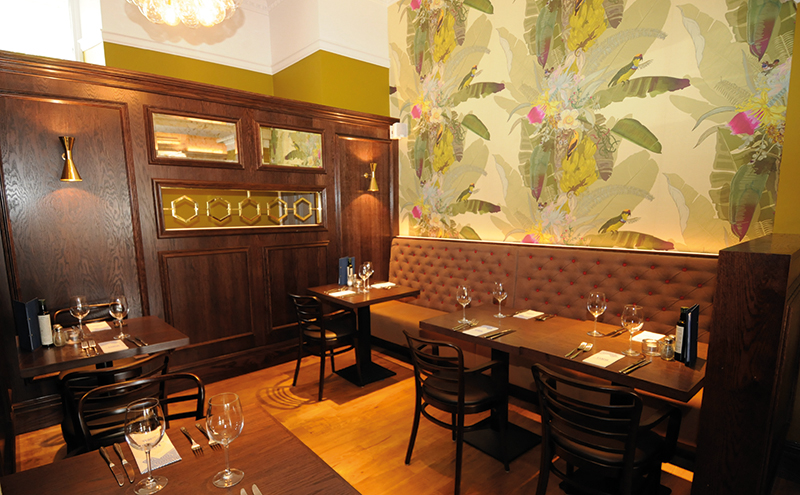 “We completely changed the menu but we just had to have the courage of our convictions to say ‘this is what we’re doing, we’re going to do what we do and we’re going to do it well,” he said.
And it seems the changes have gone down well with customers.
“It’s been very busy; the thing with this site is we knew it was going to be weekends,” said Rory.
“Saturday is constant from 12 o’clock.”
To cope with the influx of customers, Bar Luca runs with a front of house team of around 15 to 20 and ten kitchen staff.
Claire admitted she hasn’t done a lot of marketing – as the buzz on social media has been so strong.
“I started a fresh Bar Luca page (on Facebook), within a week we had over 5000 followers, which is amazing – I’m replying to over 150 messages over a weekend,” said Claire.
Rory reckons the approach to entertainment has also played a part in Bar Luca’s success.
“In most places in Kilmarnock it’s a DJ at the weekend, we’re putting on live acoustic acts at the weekend, quite mellow, laidback, it’s getting that balance between the bar area and restaurant area but it’s just bringing something a wee bit different,” said Rory.
He added that, for Riva, it’s about creating an ‘experience’ for customers.
“The perfect time for me was Friday night there, when there was three or four tables in for dinner, they then moved through to the bar area to listen to the musician and they had beer and cocktails – and that’s what we’re trying to do, that whole experience,” added Rory.
“The kind of feedback we got when we first opened was a lot of people leave Kilmarnock at the weekend because there’s not places they want to go so they’ll go to Glasgow, they’ll go to Prestwick, so it’s about providing something different that met their expectations that kept them in Kilmarnock.”