With a blanket of snow covering the ground at the end of April, The Bellachroy Hotel on the Isle of Mull is a far cry from the hot desert climates of Dubai and Abu Dhabi. 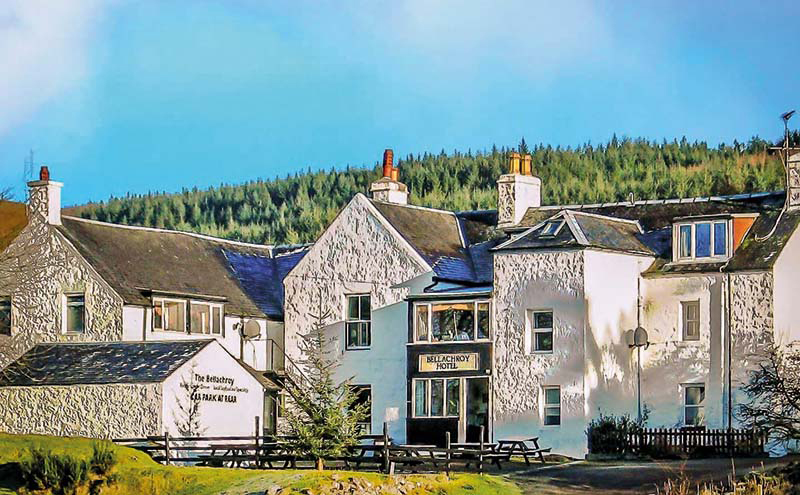 Yet despite living and working in the Middle East for seven years, after falling in love with the west coast of Scotland, husband and wife hoteliers Anthony Ratcliff and Christine Weaver made the radical decision to trade the burgeoning Middle Eastern restaurant scene for rustic country living and bought The Bellachroy Hotel in November 2013.
When in Abu Dhabi, Anthony was the food and beverage director for the Yas Viceroy – in charge of around 750 employees and running the restaurant operation where the Abu Dhabi Grand Prix is based.
Christine’s career as an events director was equally impressive, with highlights including arranging the state visit for the Queen and Prince Phillip when they visited Abu Dhabi.
Despite the radical lifestyle change, Christine insisted that the couple are just as busy as they were in the Middle East, describing The Bellachroy as a “round-the-clock business”.
“It’s not a change of pace,” explained Christine.
“We still work as hard, because we’re both so passionate about what we do and we’re very keen to make this business the best we can.
“Ant’s father, grandfather and great grandfather have all been hoteliers so he was born and brought up in a hotel, so it’s kind of in his blood.”
The Bellachroy Hotel ticked a lot of boxes for Christine and Anthony.
Dating back to 1608, it is said to be the oldest inn on Mull and boasts a 32-cover restaurant, a bar area and seven bedrooms.
Situated in the rural village of Dervaig, between Calgary Bay and Tobermory, the location itself brings its own challenges.
“As soon as we put our postcode into [an] order system it would come up ‘we don’t deliver to the Isle of Mull’ so you learn to pick companies that you know will deliver for you,” said Christine.
The Bellachroy’s suppliers include Tennent’s, Inverarity Morton, JM Breckenridge, Woodward and Brakes Group.
The island also provides plenty of fresh local produce. Local suppliers are used as and when products are available, which Christine said works well for The Bellachroy’s menus.
“We very much reflect the seasons,” she said.
“This time of year is quite good for seafood and other bits and pieces. We get crab, lobster, mussels, oysters – we’re quite well served on the island, which is good.”
Working with both local suppliers and mainland companies works in Christine and Anthony’s favour as Scotland’s unpredictable weather can cause issues.
With snow falling during SLTN’s conversation with Christine at the end of April, she admitted she was worried about deliveries reaching the island.
“When you have weather like this, a snowy day, I’m concerned how our deliveries are going to get to us,” she said.
“We have a single-track road and we’ve got quite a lot of snow, so whether they will come or not I don’t know.”
Staffing the venue can also present challenges.
While, off-season, the hotel is run with a staff of four or five, during peak season it has a full complement of 12.
But, given the location of The Bellachroy, Christine said she and Anthony have had to adapt to always being prepared and having backup plans in place.
“When things are closed here things are closed and that’s that, so you’ve got to be really organised with the logistics of what you’re doing,” said Christine.
The hotel’s location has also meant it has felt the impact of the lower drink drive limit.
“People we used to see that would come over for Sunday lunch or Saturday night dinner who would have a drink or two; obviously that business is completely gone for us now,” admitted Christine.
As a result, she said the business has had to “evolve” to counter any impact.
One way they have done this is by altering the layout of the property to add the seventh letting bedroom and upgrading all of the rooms to make them more family-friendly.
And Christine said there are plans to further increase the number of bedrooms.
Accommodation aside, the The Bellachroy benefits from strong local support.
“We still have a big local trade, because we’re in the village we’re in the heart of the community and that’s important to us and a number of people in the village,” said Christine.
“It’s quite traditional, it’s nice like that.”
And it seems there could be an influx of visitors to Mull this summer, in the wake of the Road Equivalent Tariff, which has reduced ferry fares; a second ferry is also set to be added to the timetable this summer.
The Bellachroy also gained recognition when it featured in Peter Irvine’s ‘Scotland the Best’ guide.
“It’s nice to get recognition for hard work, because we really do work hard,” added Christine.
“It’s nice to know you’re going in the right direction”.