Poco Havana is the brainchild of Ryan Dexter and Ross Beattie, and was born out of their drive to run their own business after working in and managing various restaurants in Princes Square owned by Ryan’s parents, Alan and Joanne, over the last ten years.
“We saved a few pennies and thought now was the right time to go off and do our own thing,” Ross told SLTN.
Before taking over the basement unit on West Regent Street, Ross said he and Ryan reckoned there was a gap in the market for Cuban/Latin American food and already had a theme and design in mind for the venue.
“We knew it was going to be Mexican and that kind of evolved into generally Latin American and Cuban, and we thought the Cuban theme was quite cool for a bar,” explained Ross.
With a clear theme in mind, the design for the outlet came naturally.
The pair took full advantage of their contacts from their Princes Square days, and worked with Frank Adams Contracts to renovate the venue. 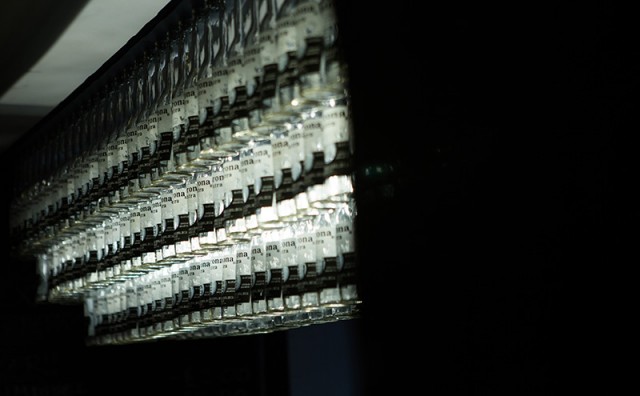 “We know Frank, we’ve worked with him in the past, not directly, but from working for Ryan’s parents we know him well and we’ve always got on with him and he’s a good guy, we trusted him,” said Ross.
Inside the venue, the changes were mainly cosmetic, according to Ross, with bold pink and blue walls and rustic lighting setting the mood.
New booth seating and a new bar were installed, and a chandelier made entirely of Corona beer bottles is one of the main features.
“I think that’s my favourite bit,” said Ross.
Further changes included a new cellar installation, which allows for a bigger draught beer offer – something that was important to Ross and Ryan.
For food and drinks the pair again turned to their contacts book from their days in Princes Square, using many of the same suppliers as Ryan’s parents.
On the food side of things, Poco Havana’s main supplier is JB Foods, with others including Seasonal Produce, LK Foods Ltd and Greencity Wholefoods for more unusual products. Drinks suppliers include Hotsauce, Matthew Clark, Dunns Food and Drinks and Tennent’s.
“We have good links with them (the suppliers) so it made sense to keep using them,” said Ross.
“We know the reps of those companies and they’re always good to us in Princes Square, so it made sense to stick with them.”
With Poco Havana up and running, Ross said they are aiming to attract a customer base of 18 to 30 year olds due to the location of the venue.
“I think with the likes of Bamboo across the road, student accommodation coming up close by, it kind of made sense to gear it that way,” said Ross.
“I think that’s probably the main market.”
Ross said trade has already been strong at weekends – more so than they expected in the first few weeks – and the focus is on building mid-week business.
Looking ahead, Ross said he and Ryan have big plans but want to focus on their first venue for the time being.