WHEN Stephen McGowan, a partner at legal firm TLT, took over as chairman of BII Scotland a little over three years ago, the organisation had been through a difficult time.
The charity, which provides support for individuals in the hospitality industry through a combination of events, mentoring and advice, was facing a number of challenges, including a declining membership. Helping to turn the organisation around was to be a significant task.
McGowan, who will step down as chairman at the organisation’s AGM in November, was determined to change perceptions of the BII as soon as possible.
“Part of the historic problem I inherited when I came on as chair four years ago was the perception of the BII as an antiquated old boys’ network,” McGowan told SLTN. “I’ve really tried to make a difference and to move away from that.”
The modernisation of the group included revamping the Scottish region’s council. 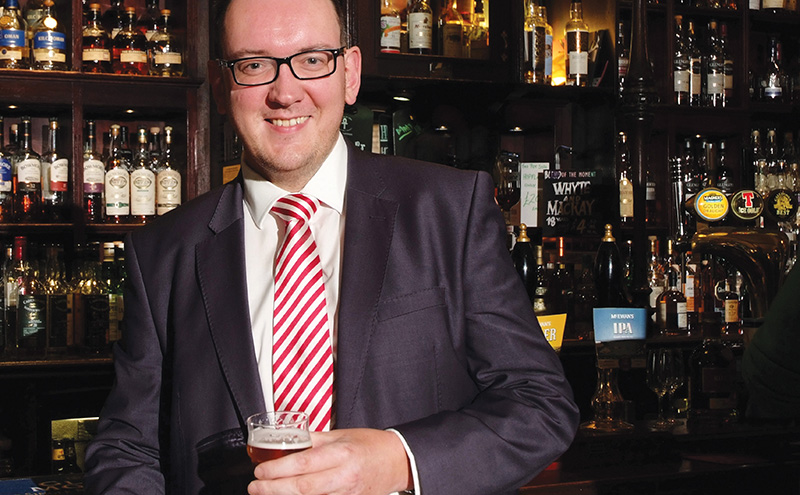 Previously comprised of what McGowan described as “predominantly men of advancing years”, the council was shaken up and several new members appointed.
The result, said McGowan, is a council that is “more representative of the licensed trade in 2016”.
Members include Joanne Graham, owner of whisky training firm The Whisky Ambassador, Glasgow publican Katie McLaren and Fiona McEachern, head brewer at Loch Lomond Brewery.
McGowan said the councillors are now split 50/50 between men and women, and cover a wide range of different businesses and outlets.
The organisation’s awards scheme was also overhauled.
“It’s been good being able to stand up at the BII Awards, once a year, and speak positively about the trade and remind [people]  that they provide happiness,” said McGowan.
“I couldn’t think of a better thing to do in life than to bring happiness into people’s lives.”
The modernisation of the organisation in Scotland appears to have paid off, with membership now in growth for the first time since 2008.
The changes in the Scottish branch have coincided with a period of change for the BII at a national level, spearheaded by the organisation’s UK chairman, Anthony Pender.
Pender, the co-founder of Yummy Pub Co, took over as chairman in 2014 and has overhauled several aspects of the organisation.
His initiatives have included the formation of a governance committee, chaired by McGowan, to oversee several nationwide changes to the organisation. These have included reforming the constitutions of each branch and introducing term limits for chairmen.
“He (Pender) has brought the types of values I wanted to see in the BII – and that I was trying to push for in the Scottish region – such as transparency and accountability and better delivery for members,” said McGowan.
The next chair for BII Scotland will be selected by vote later in the year, and after four years at the helm McGowan said there are several things the next chair should ensure they have in place.
“I’d say one of the things you should do is make sure you get good people around you – people that are passionate about the trade and are willing to go the extra mile,” he said.
“Thankfully I’ve been able to do that in my time.
“Having good people around you is an absolute must.”
And he challenged the next chair to make the younger members of the trade a priority during their tenure at the top of the organisation.
“I would like to see the next chair look to spend more time engaging with the young and up and coming members of the licensed trade,” he said.
“I think we need to spend more time looking at young people and how we can support them through things like scholarships and apprenticeships.
“Hopefully I’ve left a platform from which the next person can address those groups of people, because they are, after all, the future.”