Numerous neat bundles of architects’ drawings and artists’ impressions of luxurious bar and bedroom interiors cover the boardroom table, giving an indication of the volume of projects Manorview Hotels & Leisure Group currently has on the go.

And as managing director Steve Graham tells SLTN about each one, it’s clear he is in his element.
He readily admits he relishes the property development aspect of his job – which is just as well because there’s no shortage of refurbishments across the burgeoning group for Steve to get stuck in to.
Last month Manorview, which won the 2015 SLTN Independent Multiple Operator of the Year Award in association with Smirnoff, completed a £300,000 revamp of the nightclub below its Coatbridge pub Innishmohr; the venue comprises two rooms – the ‘retro’ 1990s-themed 30s and Sugar, which is described as more loungey with a focus on RnB and dance music.
The group, whose outlets include The Lynnhurst in Johnstone and The Commercial in Wishaw, is also just two weeks away from unveiling Boclair House Hotel – a former council building in Bearsden, north of Glasgow, which it has spent £2.5 million transforming into a 12-suite boutique hotel.
As if that wasn’t enough, Manorview acquired Cornhill House in Biggar – a nine-bedroom hotel set in ten acres which it has renamed Cornhill Castle – at the end of February; it is poised to turn the former Alexander Cullen Church in Hamilton into The Citadel – a bar and restaurant with function suite; and, having secured planning permission following a lengthy appeals process, it plans to spend around £3 million extending and refurbishing Bowfield – the hotel and leisure club near the Renfrewshire village of Howwood where the company’s head office is based – to create what will become the group’s “flagship” venue.
Manorview has also grown its leasehold division, Manorview Pub Partnerships (MPP), with the acquisition of the Applebank Inn in Larkhall late last year, which took the MPP estate to five.
And the company, which was established in 2007, continues to scope out potential acquisitions for both the leasehold and managed estates.
But it is Boclair House Hotel that has enjoyed the lion’s share of the company’s attention in recent months.
Due to open at the end of March, the grade B-listed property, which dates from 1802, has been painstakingly restored and renovated by Manorview, which bought the building in summer 2014.
The year-long project, which got underway in March 2015, saw the firm work with Space ID – the design firm which most recently worked on Manorview’s £2.5m revamp of The Busby Hotel in 2014 – and its 26-strong in-house maintenance team led by the company’s property development director Anthony Cowley.
The root and branch refurbishment has seen the building, which was previously the headquarters of East Dunbartonshire Council’s education department, completely overhauled to create a lounge bar and restaurant, a function room which can accommodate up to 150, and 12 individually-designed suites; outside, extensive work was carried out on the property’s exterior and the gardens landscaped.
Steve admits it has been the group’s “most challenging” project to date, with the spend increasing as a result.
“It’s probably the project that’s escalated most in terms of the work we had to do and so what we had to spend,” he told SLTN. 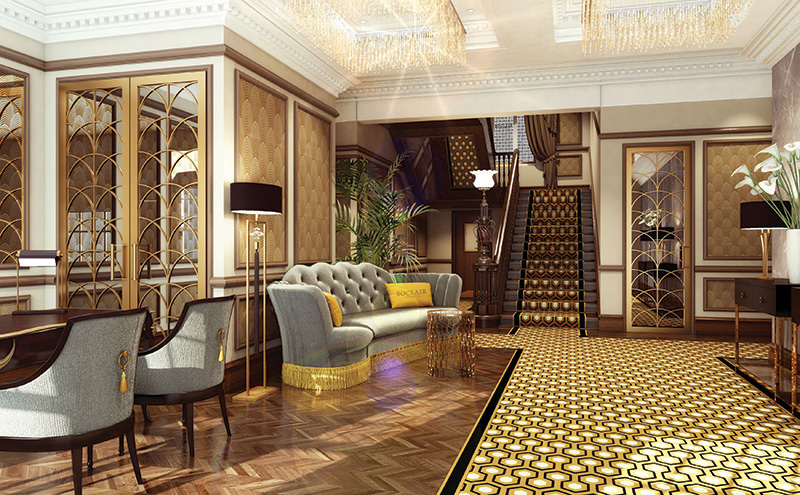 “We budgeted £2 million, we had a contingency of £200,000 but we spent £2.5m in the end.
“It’s the oldest property we’ve done and I think because it’s listed we had more to deal with.
“We replaced the windows, repaired the roof, took down, restored and put back the guttering, repointed the entire building; there’s been no stone left unturned.
“It’s like a new building and the standard of the place is five-star. I’m excited about it and I’m confident about it doing the numbers.”
Once the doors at Boclair House open in a fortnight’s time, attention will turn to maintenance jobs on existing properties in the estate before it’s on to the next major project – the extension and refurbishment of Bowfield.
Manorview has already invested in the property, which it bought in March 2012, refurbishing the gym and changing rooms last year.
The next stage of the development, which is expected to get underway in the next couple of months following a three-year planning and appeals process, will see a 40-bedroom extension added to the property, which already has 28 rooms, the function room extended to accommodate around 200 and all public areas refurbished.
Once complete, Bowfield, which is set in 15 acres, will become Manorview’s “flagship” venue.
The group also intends to launch The Citadel in Hamilton during the next 12 months; and has a refurbishment of the newly-acquired Cornhill Castle pencilled in as a “long-term project”.
And there could well be more properties joining the Manorview fold.
But Steve is quick to stress there’s no ‘target’ number of outlets.
“We want to keep on growing as opportunities arise but we’ll continue to grow as we have –  carefully and without compromising quality, buying properties and adding value; we’re not just expanding for the sake of it,” he said.
“I like the diversity we have in the group – that we have pubs, clubs, leisure and gyms, accommodation, weddings and functions. That’s why winning the SLTN Independent Multiple Operator of the Year Award means so much.
“I think the diversity is why we’ve seen less of an impact from the drink drive limit – because we have pushed other areas of the business to compensate for any drop in wet sales; wet sales are down between 5% and 10% but we’ve compensated for that in other areas.
“We invest a lot in training because you can’t afford to let the quality slip; having my niece Fallon [Cowley] as operations director is great.
“Barclays have been very supportive. The relationship is getting stronger; they’ve been standing shoulder to shoulder with us.
“And we’ve got a great team. It’s all very well for me to sit here and talk about the deals and the properties and projects but you’ve got to have that infrastructure and investment in the staff and that’s something we’re really focused on.”