Scottish operators are being urged to back a new campaign calling for a cut in beer duty in next month’s Budget. 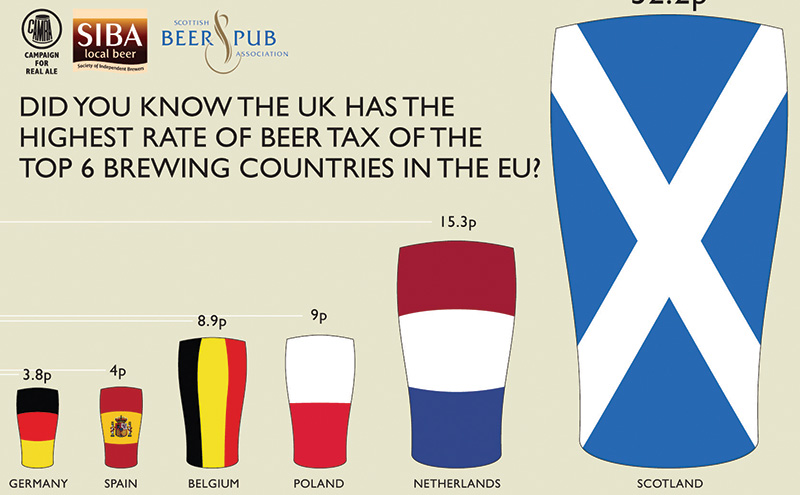 The Scottish Beer & Pub Association (SBPA) has joined forces with CAMRA (Campaign for Real Ale) and SIBA (Society of Independent Brewers) to lobby for a fourth consecutive duty cut ahead of the 2016 Budget on March 16.
Licensees are being urged to back the campaign by filling in the postcard, which is included with this issue of SLTN, and sending it to their local MP.
The card highlights the “huge discrepancy” between beer duty in Scotland – currently 52p a pint – and other European countries, including Germany and Spain where the duty is 4p a pint; it says a further cut in beer duty could benefit the Scottish on-trade in a number of ways, including helping struggling pubs stay open and increasing investment.
The SBPA said the consecutive one penny cuts in the last three Budgets, following the end of the beer duty escalator under which beer taxes are said to have risen by 42% between 2008 and 2013, has brought “great benefits”, with a pint in a pub estimated to be 20p cheaper now than it would have been under the previous tax policy.
Brigid Simmonds, chief executive of the SBPA, urged licensees north of the border to send the campaign postcard to their MP to “show how important a reduction in beer duty is to the prosperity of the Scottish pub trade, particularly at a time when there are a wide range of other pressures affecting licensees”.
“This is a great campaign that the whole industry can get behind,” said Simmonds.
“The more people in Scotland who back the campaign, the better the chance of a historic, fourth cut in beer duty.”
As part of the campaign, the chief executives of CAMRA, SIBA, and the BBPA, have written to MPs urging them to back a new parliamentary motion calling for a one penny cut in beer tax. The motion highlights the boost in employment and investment that has followed the three successive duty cuts.