A Housekeeper working at a St Andrews hotel was the big Scottish winner at the recent AA Hospitality Awards.
Sarah Middlemas of The Old Course Hotel took the AA Housekeeper of the Year Award at an awards ceremony held at the Grosvenor House Hotel in London earlier this month. 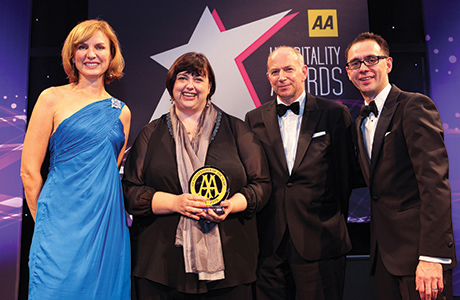 Middlemas was selected by a judging panel comprised of AA inspectors and other industry professionals.
They were seeking a housekeeper who demonstrated “outstanding commitment and performance”, while going “above and beyond the call of duty”.
There was further Scottish success at the event, as three restaurants were awarded AA Rosettes.
Edinburgh restaurant The Kitchin was awarded five AA Rosettes, becoming the only restaurant in Scotland to enjoy that status, while Cail Bruich in Glasgow was awarded three AA Rosettes, as was The Cellar in Anstruther, which also picked up its first Michelin Star in September.
The Kitchin’s sister venue, The Scran and Scallie, was also recognised at the ceremony, being named Pub of the Year for Scotland.
Other venues to top the Scottish categories at the awards were The Gannet in Glasgow, Rufflets Country House in St Andrews and Ubiquitous Chip, Glasgow, which picked up the Scottish restaurant of the year, hotel of the year and wine awards respectively.
All the winners will appear in the 2016 AA Restaurant, Hotel and Pub guides.