Chefs take street food to the next level, as Matthew Lynas reports

A Glasgow-based chef duo have unveiled their newest dining concept in the city – and it’s a venue with a lot of Seoul.
Chefs Ben Dantzic and James Forrest have overhauled and re-launched their Burger Meats Bun venue on Glasgow’s West Regent Street as Bó Kantina.

Billed as bringing “a taste of East Asia straight to Glasgow”, the new restaurant sees the chefs serving up Asian fusion street food with a heavy Korean influence and a Mexican twist.
And while the pair haven’t abandoned burgers entirely – the Edinburgh branch of Burger Meats Bun continues to trade and a replacement Glasgow venue is being sought – Dantzic told SLTN the time was right for something different.
“It’s a concept we’ve always had in mind,” he said.
“It’s a cuisine we’re both really into and passionate about. It’s probably more like what James would cook at home.
“We thought Glasgow was crying out for something new and original.”
The pair of chefs, who met while working at Fife restaurant The Peat Inn, have been waiting for a good while to bring an Asian street food concept to Glasgow.
Dantzic said both he and Forrest have been “big followers” of US-based Asian street food pioneers David Chang and Roy Choi, and have also been keeping tabs on the London restaurant scene where they noticed that Asian street food “was finally moving over here from the States”. 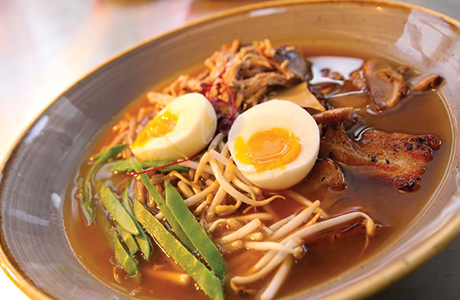 Describing the new offer as a “natural evolution” of the street food trend, Dantzic said he and Forrest decided the time was right to “take the lead and try something completely different”.
‘Different’ is an accurate word when comparing the Bó Kantina menu to its burger joint predecessor.
The new food offer comprises a range of dishes, many with bold east Asian flavours, and some of which may be unfamiliar to Scottish diners.
Bó Kantina’s menu is made up of a selection of ‘sharing street foods’, a ‘make your meal’ option inviting diners to build their own dish from a burrito, rice bowl or salad bowl base, a collection of main dishes and Korean style bó ssäm sharing platers.
Fusion dishes on offer include tacos filled with radish kimchi, mange tout and sprouts, tostadas topped with bulgogi (Korean pork shoulder), and kimchi puree as well as a selection of bao – soft steamed buns with a choice of fillings including crispy king prawns with gochujang, a Korean chili paste.
The dishes may be different, but despite the exotic nature of the food, Dantzic said the venue has retained the same commitment to sourcing from local suppliers that is at the heart of Burger Meats Bun.
Many of the suppliers have been retained, said Dantzic, although the new menu also sees the chef making a bi-weekly trip to Asian wholesaler Seewoo in north Glasgow.
One of the key Asian ingredients on the Bó Kantina menu, kimchi, is also  now made on site, and despite being a new flavour for a lot of diners, Dantzic said the response has been great.
“I think the majority seem to like it,” he said.
“The encouraging thing is everyone seems willing to try it.”
A staple of Korean dining, consumed either as a side dish or as an ingredient in the majority of meals, kimchi is a spicy fermented vegetable dish which can be made from a range of base ingredients, including napa cabbage, daikon radish and cucumber.
Dantzic said the team at Bó Kantina is now producing two batches of kimchi per week, and although the process is relatively straightforward, there may be other reasons customers won’t be replicating this dish at home.
“I wouldn’t recommend doing it at home as it’ll stink out your fridge,” he said.
In addition to a new food offer, the launch of Bó Kantina also saw the introduction of a new cocktail menu, built by Dantzic and Forrest with a few tips from drinks supplier Michael Lovedale of Hotsauce Drinks.
The Bó Kantina cocktail menu comprises seven classic cocktails each with a “Bó alternative” such as ‘Old Boy’, a twist on the classic Old Fashioned which replaces bourbon with Nikka whisky and Korean rice wine soju.