Autumn was officially ushered in with last week’s equinox – bringing with it the traditional harvest time.
For cider producers, it means plentiful fruit – and, despite cider’s year-round appeal, a pronounced sales spike.
Peter Stuart, of Scottish cider producer Thistly Cross, said he expects an uplift in cider sales in the coming weeks.
“In my experience, people in the northern hemisphere are genetically predetermined to go apple mad at this time of year,” he said. 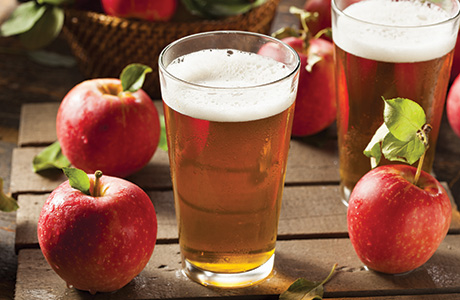 “It must be the hunter gatherer inside of us all – picking soft fruit, berries, apples as part of the harvest before the winter.
“It’s then a natural extension of this impulse, to preserve, can, jar, ferment, the fruits of our labour.”
Stuart said the firm sees a “huge pick-up in sales” at this time of year.
“In the autumn consumers crave that full apple flavour and impact,” he added. “To be honest, all of our real fruit ciders do well as part of the harvest theme of autumn.”
Martin Thatcher, managing director of Thatchers Cider, said autumn brings an opportunity to celebrate cider’s origins, provenance and heritage; and gives publicans a chance to drive sales.
“Autumn is all about the apple – October has Apple Day and it’s Cider Month,” said Thatcher.
“Harvest time is a very exciting time of year for cider makers and linking cider to an apple-themed promotion or menu, for example, is a great excuse for operators to share this excitement and have a party. It also reminds customers about where cider comes from – that it’s a natural product that originates from orchards.”
Alongside the growth in demand for craft beers and spirits, the cider category is also said to be experiencing a shift towards more traditional styles.
“Fundamentally consumers want to buy great-tasting ciders with authenticity behind their propositions and the revival of the beer category has shown the way with the growth of craft beer brands with authenticity at their heart,” said Geoff Bradman, head of sales at Westons, whose portfolio includes Henry Westons and Old Rosie cloudy cider.
“At the moment our projections indicate continued growth through fruit cider and the traditional premium sub-categories of the market,” he said.
Although apple is expected to retain the top spot, the popularity of fruit ciders is said to be continuing to grow.
Kathryn Purchase, director of customer marketing at Carlsberg UK, whose Somersby cider range includes Apple Burst, Cranberry and Blackberry variants, advised licensees to ensure they stock a range of flavoured ciders.
“We are seeing the importance of flavoured variants grow year on year, as consumers are becoming increasingly discerning and are keen to trial new and interesting flavour profiles,” said Purchase.
“We also suggest operators select a core range based on their regular patrons, providing a small selection of classic and modern draught ciders, as well as an offering of core consumer favourites, such as the Somersby range, perhaps rotating flavour variants.”
Andrew Richardson, director of VC2 Brands – the firm behind Stivy’s Cider which is launching a Fruit Salad variant, insisted flavoured ciders are all about having fun.
“People are looking for something different all the time and in the flavoured cider category they’re more interested in the taste and appearance of the drink than where the apples come from,” he said.
“It’s more fun, it’s more sociable and it’s more upbeat. It’s a party drink you need to keep fresh with different flavours.”
Innovation in the cider category has “changed consumer perceptions” of the drink, according to Anna Drummond, cider brand manager at Tennent Caledonian Breweries, which is set to launch Magners Original Ice Cold and Magners Alcohol Free in the Scottish on-trade this autumn.
Drummond said: “The key to success for publicans is offering consumers a comprehensive range of ciders to highlight the breadth of the category in terms of both flavours and formats.
“Recently, we have witnessed a resurgence in the popularity of draught ciders and as a result, a key area of focus for licensees should be on perfecting their draught range.”
Increasing demand for premium ciders is also credited with driving growth in the category.
Drummond said innovation has  influenced consumer choices.
“This change in consumption patterns is down to the high degree of innovation and product development that continues to shape the category,” she added.
“Autumn is an important sales period for Magners and as we head into the cooler months, we will be launching a number of new products and innovations to the Scottish on-trade.”