THE booming craft beer scene may be making waves in the Scottish on-trade, but for real liquid shifting power world beer is still arguably the behemoth to beat, with sales growth outperforming the total beer category and doing so at high volume. 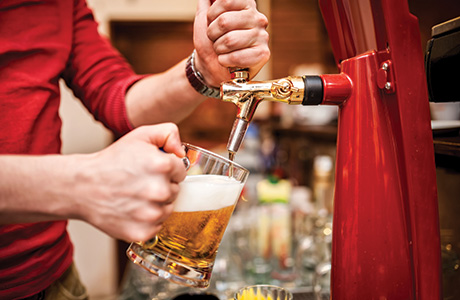 With both provenance and quality in high demand at the moment, the brewers behind some of the big global beer brands in Scotland’s pubs said their products are ideally placed to capitalise on this trend.
Julie McGraw, customer marketing manager at Molson Coors Scotland, whose portfolio includes Grolsch and Cobra, said the brewer’s own research revealed Scottish drinkers are “a bit more adventurous” when it comes to beer. “They like to explore and discover new brands, passionately share their new finds with their peer group and influence what others drink on a night out,” she said.
If the Scottish customer’s sense of adventure steers towards world beer, then the emergence of craft beer may have served to boost the category further in the on-trade, suggested Jessica Markowski of Stella Artois parent company AB InBev.
“Craft has been great in sparking more conversations around the category and supporting renewed consumer interest in beer globally,” she said.
“However, global brands still have an integral role to play. It’s important that licensees stock world beers that consumers love to ensure their ‘go to’ beer is on offer when they want it.”
The growth in popularity that world beer has seen of late could be attributed in part to the sub-category’s premium status, which Daf Pugh Williams, of Guinness parent company Diageo GB, said is a key factor for customers when they choose a beer.
“Consumers are seeking a richer value or experience from what they consume,” said Williams.
“They are interested in the stories, ingredients and provenance of products and this is a trend we are seeing across food and drink as a whole, and it is influencing purchase decisions.”
In addition to their premium status  world beers also offer variety, as highlighted by Genna Burchell, marketing manager for world beers at Charles Wells, the firm behind Estrella Damm.
“World beers offer operators a great way to inject variety into their range; offering distinctive, interesting beers which are also going to sell well instead of gathering dust on the shelf,” said Burchell.
While world beer may bring more variety to the taps, Burchell said that the demographics of those ordering pints from around the globe is starting to settle.
“While the appeal of world beer is growing rapidly and widely, we are certainly seeing demographical trends emerging,” she added.
“These types of beers appeal mainly to younger, more sociable and affluent drinkers who are shying away from ubiquitous brands in search of not only a better quality beer, but one with a unique identity and character, and they are more than willing to pay a premium for it.”
With such a broad range available – and with an increasingly discerning customer base – ranging is key to getting world beer right, and John Gemmell, trading director at Heineken UK, reckons breadth is the way to go to meet demands at the bar.
“Our category advice to customers is to go for breadth and not depth,” he said.
“What we mean by that is have a variety of products playing a different role. Don’t necessarily have two or three of the same brand or the same type of brand on the bar.”
Matt Munro of Wallaces TCB, the firm behind Heverlee and Menabrea, agreed  that publicans should offer a broad selection, and suggested balancing some guest beers around a core range.
“Offering consumers a number of drinking options, rotated around core best sellers, will always be a winning formula,” said Munro.
Getting the right range in is one thing, but Graham Archibald of Morgenrot reckons even a great beer can fall short of its potential if it isn’t promoted properly. “I always say to pub and bar owners when stocking any beer that it has to be promoted and presented properly to give yourself the best chance of sale,” said Archibald.
As part of that, Archibald suggested training staff on “a few interesting facts and possible food matches from the menu”.
“[Staff recommendations are] a great way to cross and up-sell in venues and most importantly promote their world beer selection,” said Archibald.
This was echoed by Kathryn Purchase of Carlsberg UK, who said that staff training could “significantly impact consumer choices”.
“It’s important to remember that drinkers are willing to trade up for a particularly special product, and training staff on the profiles, heritage and story of such beers will help them entice the customer into selecting a more premium international variant,” said Purchase.
Sam Rhodes of Miller Brands UK agreed on the importance of in-outlet promotion when selling world beer, and advised operators to consider where their beer is placed along the bar and how this may affect profits.
“Place your most profitable brands in key locations on the bar as consumers aim for the centre of the bar and give greatest consideration to stand alone fonts and those on the edge of multiple fonts,” said Rhodes.